For a child,home can be a place of safety & love,or a living hell...

For sixteen years Ken and Patrick Doyle's home was a place of suffering.Behind the doors of their ordinary,three bedroom home they were subjected to every kind of deprivation and humiliation at the hands of the one person who should have loved and protected them-their own mother. Stripped naked and savagely beaten,locked up for days on end,the two young boys were singled out from their siblings for a catalogue of abuse.Their mother beat them.starved them and even forced them both out to steal for her.But despite numerous official reports of abuse from social workers garda and health boards their suffering continued ...

Ken & Patrick tell the horrifying story of their childhood and how they survived it.

Because I feel that in the heavens above
The angels, whispering one to another,
Can find among their burning tears of love,
None so devotional as that of Mother,
Therefore, by that dear name I have long called you,
You who are more than mother unto me

Therte is an Achived News Article on "Mother From Hell"

Please take a look at these files that we just received under the data protection act.The very man who told us he would lift every rock to get us justice went behind our backs and asked the DPP not to charge her.This has to stop in Ireland victims deserve justice and closure.In our case the detective became judge,jury,psychologist .The garda are stopping victims from ever getting justice or closure.In his statement to the DPP he lied the whole way through it.He sent the DPP a complete police report on my brother and I.He even got a teacher to write a statement to tell the DPP I put bubble gum in his door.They are a bunch of fools covering up abuse that the state failed the victims. 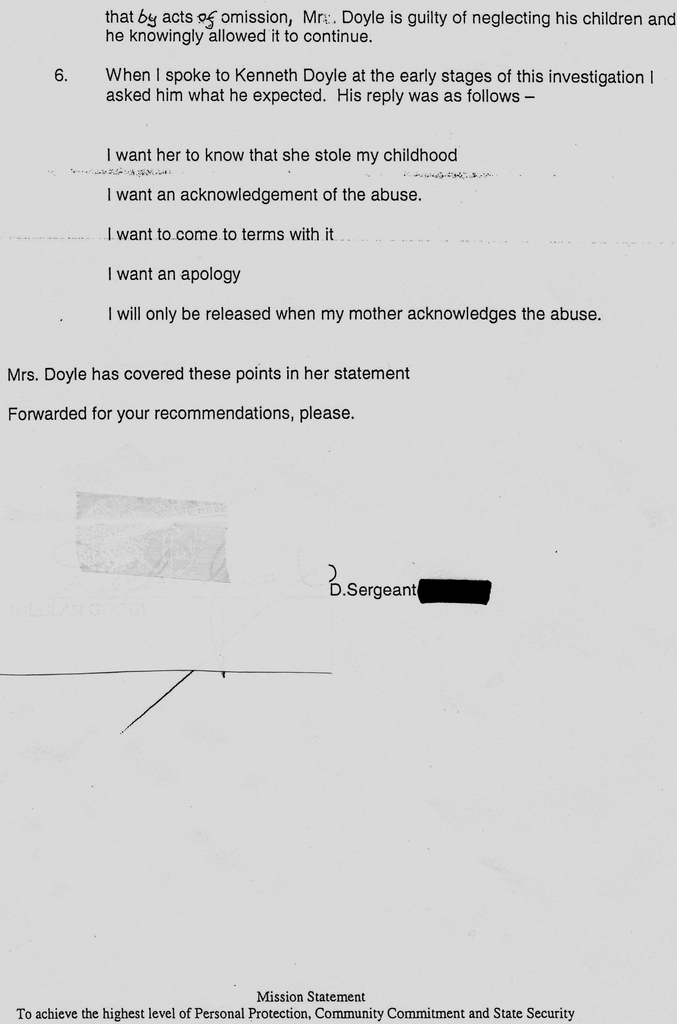 Upon receiving the statement from the detective to the DPP. I filed a few complaints against this officer. He has no medical qualifications and should not be allowed to derail justice to victims who have suffered. Our mother was not depressed she was just pure evil. Her own mother dropped dead in 1958 two hours after beating up her husband. He failed to look into our mothers background. He covered up the case to protect the state. His own police department refused to help social workers when asked. We gave the detective these files but he did not want to see them. Don't you just love the way they put on their letters Private and confidential ?. So as no one can see them denying victims justice. 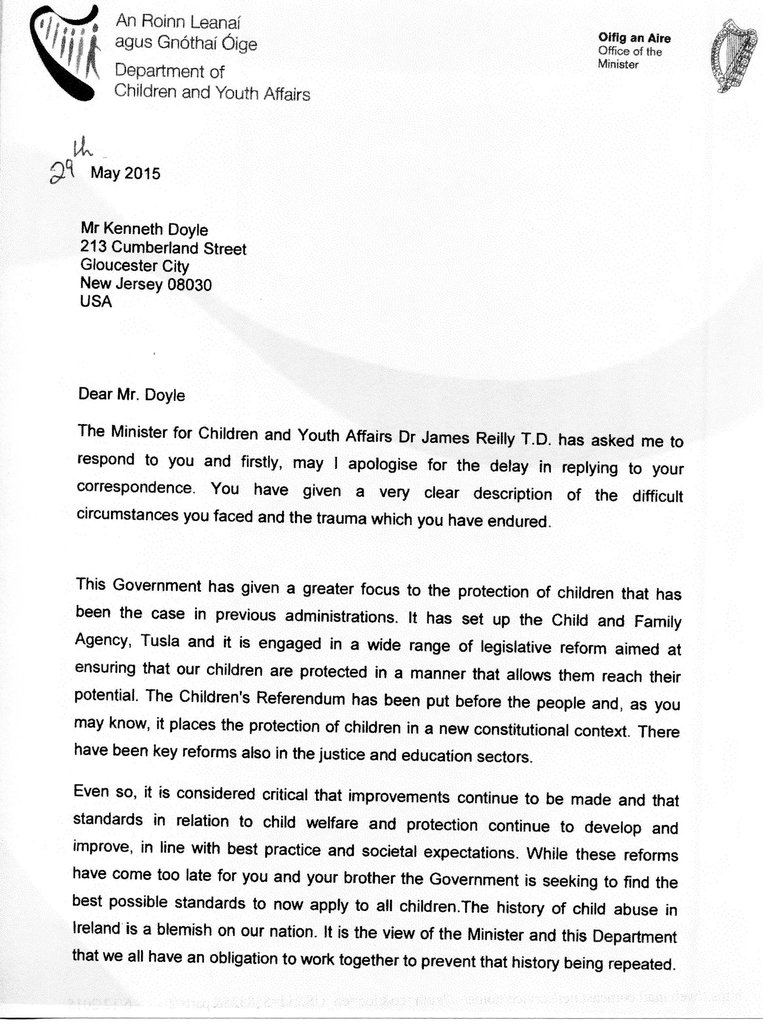 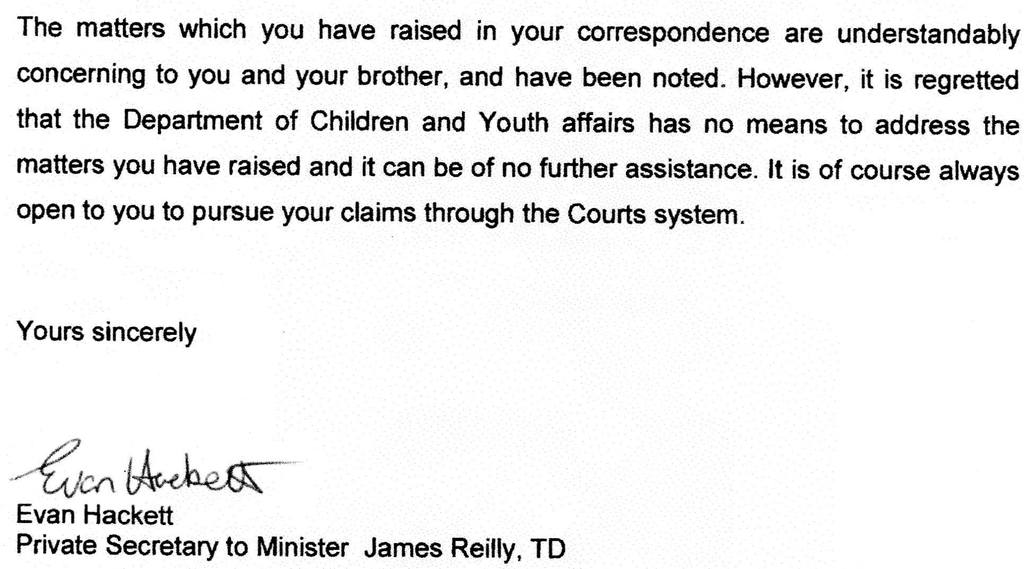 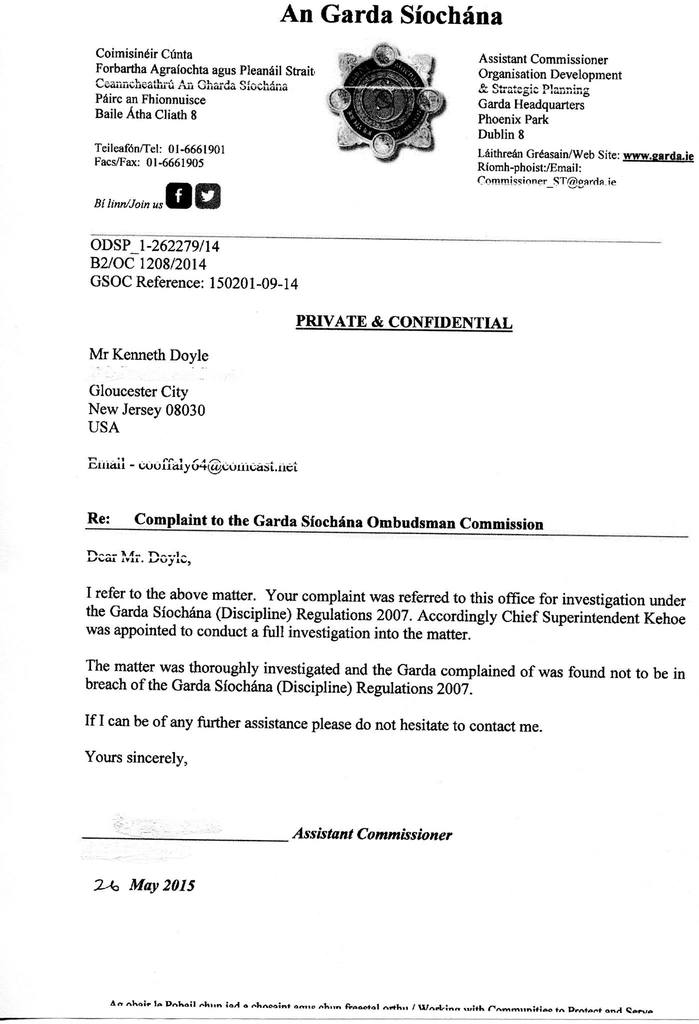 This is so typical re Ireland and the HSE and the Gardai. I am not one bit surprised.

I have found the data commissioner wonderful and he even took one agency to court for me to get files.

But like this case - the police words were " you do realise you will ruin an old mans life by making this declaration" I said well what about the last 40 years that I have carried the pain of the abuse with me? and that my mother knew and did nothing?

I heard all about my mother and abuser being pillars of society. Really.

Ireland clearly has a pattern to address here supporting abusers.

There is no pint in Irish victims coming forward while the police can stop the victim from ever getting closure.I thought it was equal justice for all.Not in Ireland.

I agree. There is only Just US in Ireland.

The only way is to write about it - like in a book - and outside of Ireland so the outside world can get a true picture of Ireland and not the one portrayed as Ireland of the welcomes etc. That's BS.

I went through one process in the court system in Ireland and I quickly learned how the abusers are protected by HSE and Gardai. I got to hell out of Ireland after that and will never return.

Catherine this is why we wrote our book and plan to finish our second one.You have to show the public the failure of it's system to protect innocent children.You would think that after all the child abuse investigations in Ireland that they would be on the victims side.No they use their police force to hide any crimes that they were involved with.In our book we put in some of our files to back up our story. Ireland is a sad country for child abuse victims.They do not care and have been getting away with it for years.But if enough of us stand up to them and shame the lot of them they will soon change.We must stop the police acting as judge ,jury and psychologists .

Sadly nothing has really changed.

Now social workers do the work of child protection and investigating - and they are not trained to do so. They replaced the Gardai now and act as judge and psychologist etc.

Children today suffer terribly at the hands of the very people paid to protect them. Gardai pass the cases back to the HSE to investigate themselves.

The HSE have a manual that explains how to mentally torture parents and children who complain about child abusers. Nothing has changed in Ireland.

Its the god complex people in charge and they love the suffering of children.

I have also written a book on this aspect.

In HSE  the abused children were to be given Electro Shock to burn out all memories of the abuse and then placed back with the perpetrator. That was 1995.

My children emigrated to USA too for safety and will never return.

The mindset is always the same- Eve ill children of Eve must suffer and sure its good for their wee souls etc.

I have put this link of Facebook and sent it world wide to professional child protectors and those who are looking into Ireland and its serious condoned child abuse.

Hello Catherine. Judging From Your Post Above I Bet Your Book Would Is Hot!

if you give me your e mail, yo can have the pdf