In April of this year I started to research on behalf of my father his mother for which he never knew.  My father was born in 1937 and was placed by his grandmother into eccles street orphanage in 1938.  At the time his mother Julia O'Donnell was with the Sisters of Charity in Cork preparing to become a Catholic.  I have found out that she was in the laundry all her life until she retired into the residential side of the place.  She died in 1996.  They renamed her Frances, because Julia is a non catholic name.

I have a photograph of her headstone, which states she was buried with 4 other ladies presumably also from the laundry.  It does say Frances (Julia) O'Donnell which i am so pleased for my dad that they did this for her.

we have also found out that he has a brother James who was born in the Bethany Home, Cork,

so really my father did not have a good childhood, we are still waitng for news about his mother and brother.

My father, sister and I are due to visit her grave in August this year.  I know it is going to so emotional for us but for my dad I cannot imagine the feelings, the pain and emotions he will be going through. 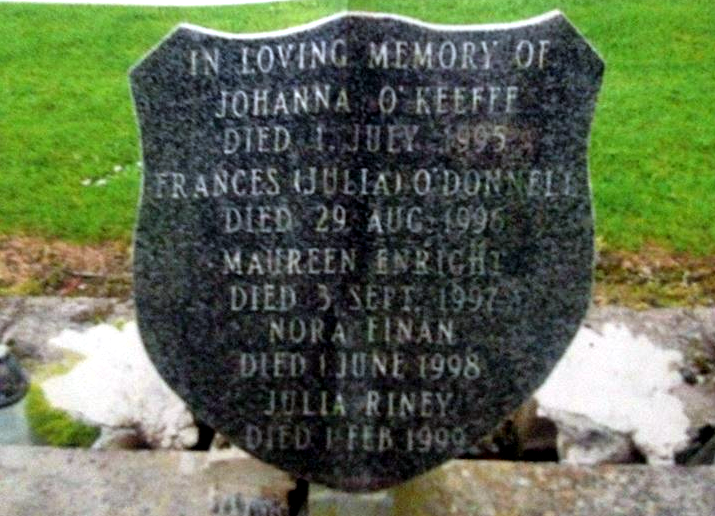 Copied it Across from Face book for you, well Downloaded edited and uploaded here

You are very Welcome!

Theresa, the sadness of yours and your Dad's story is one of so many...a lifetime of slavery for having a child...and yet and how the Catholic Church bellow across the world today against abortion and the rights of the child and when loving mothers go ahead and have that loving child...how the monsters of Church and State torture them both...nothing has changed...God Bless you and your Dad...I pray you will find peace and safety within your love...but just like the holocaust...we must never forget...so keep telling your story because it shames Church and State of control of the innocent Irish human life..and sadly it is ongoing today in so many tortures of human life....Love to you all...

Permalink Reply by theresa wardley on September 14, 2014 at 0:06
Thank you Teri for your kind words, I whole heartedly agree that even though there is so much pain we most definitely must never forget and make sure the Catholic Church be held accountable for these atrocities

Theresa, You are welcome...all we can do is share and show kindness...the scars of abuse of any kind can never ease as long as Church and State continue in the shadows of their lies covering up torture in their satanic policy of abduction of lives...

Permalink Reply by Rob Northall on April 5, 2015 at 15:07
Ireland’s Forced Adoption: ‘Help me find my long lost brother before it’s too late’

Following the launch of the Philomena Project, a call on the Irish Government to release thousands of forced adoption files, The Irish Post shines a light on victims of the shocking practice in Britain.

A BRADFORD man separated from his family in a home for unmarried mums has made an emotional plea to his long lost brother.

Fred O’Donnell was kept from ever meeting his relatives as a result of Ireland’s callous policy of giving away the children of single women.

But now the 76-year-old father-of-three faces a race against time to find his only living family after learning of his brother’s existence just last year.

“It would mean everything to me if I could meet him,” Mr O’Donnell said.

“That would be the most important thing in my whole life because every single day I have asked myself whether I have anybody in this world who is my own. I have gone through life thinking I have nobody who belongs to me.”

Irish social services have told the retired gas fitter that his brother is living in England. But they refuse to give him any more information because of privacy laws.

“The Irish Government should tell me because I am his next of kin and there are only the two of us. They should tell us how to find our relatives before it is too late because of everything we went through.”

Although it would not assist his search, he added that he backs The Philomena Project.

The campaign, which launched last month and takes its name from the Hertfordshire-based woman whose story was made into Oscar-nominated film Philomena, aims to pressure the Irish Government into releasing 60,000 secret adoption....

Campaigners claim as many as 85 per cent of the adoptions were forced upon unwilling mothers.

They say the files could help reunite children with their natural mothers, thousands of whom are believed to have fled to Britain.

Mr O’Donnell, who came to England in 1960, said the Irish Government should also compensate those who passed through mother and baby homes because of the suffering it caused them.

Up until last year, Mr O’Donnell knew nothing about his natural family except that his mum’s name was Julia.

He said he was passed between a series of “owners”, including orphanages, foster parents and cruel Christian Brothers, after being born in St Patrick’s Mother and Baby Home in Dublin.

“The Christian Brothers school was a very hard, tough place to be,” he said. “I got beatings and stuff like that from the Brothers and if you reported anything to a superior Brother you got double the beating.

“That was a terrible place and I never even knew why I was there until I got my records, which say I was sentenced to spend eight years there after being found begging in the streets.”

Mr O’Donnell said he was never able to find out anything else about his mum.

But after his eldest daughter Theresa got in touch with dozens of organisations in Ireland, he finally discovered his roots and learnt that his mum had another son in a different mother and baby home two years before she gave birth to him.

She was then sent to a Magdalene Laundry, the institutions now infamous for widespread abuse, where she spent almost 60 years before her death in 1996.

Thanks to his daughter’s digging, Mr O’Donnell was then sent the only file on his mum held by nuns, a clipping of a newspaper story about when she was reunited with her first son after 33 years.

It included the only pictures Mr O’Donnell has ever seen of his mother and his brother.

“If I could have met my mum I would have asked her why I was separated from my brother,” he said.

“At least if we were both in the same place we would have known one another and would have had someone in the world.

“Now I will never know unless I get to meet my brother. I wonder if she told him who I was or if she had forgotten all about me.”

Without meeting his brother, the only physical connection Mr O’Donnell will have ever had with his family since his birth will be with his mother’s grave in Cork.

“I cried my heart out when we went to visit the grave last year,” he said.

“I am angry at the Government more than anyone else about what happened to me. They should have been taking out adverts in papers over here telling us how to find our relatives in Ireland.

“This is my life and I really feel down and out because I never got the chance to meet my family.”