Permission refused for Garden of Remembrance memorial to abuse victims

Permission refused for Garden of Remembrance memorial to abuse victims

There were plans in place to have ‘Journey of Light’ erected by 2014. 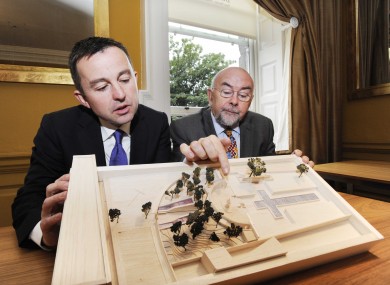 AN BORD PLEANÁLA has refused to grant permission for a memorial dedicated to abuse victims to be built at the Garden of Remembrance.

In its ruling today, the planning authority upheld an appeal by conservationists who had submitted strong objections to the location of the memorial within the grounds.

An Bord Pleanála said the proposed development – which had been given the green light by Dublin City Council – was contrary to the proper planning and sustainable development of the area.

Describing the site as a place of national importance, the board said the ‘Journey of Light’ memorial would adversely impact on its character, setting and function.

If given the go ahead, the memorial would also have detracted from the architectural coherence of the space, damage it legibility and significantly transform the area from what was originally conceived, continued the planners.

The €500,000 memorial, revealed in July 2012 following a recommendation in the Ryan Report, was met with a mixed reaction from survivors. Those not in favour of the plans said it was inappropriate to place one memorial in the same space as another.

“We are astonished that this appalling proposition emanated from one of our Government’s agencies. It could only have come from a group of people who have a profound contempt for Ireland and Irish patriotism, and also for the victims of child abuse in the State’s institutions,” said Alice Hanratty and the other apellants today.

“An Bord’s decision ensures that the proper respect and homage called for by An Uachtaran at last Sunday’s ceremony for those who laid down their lives for Ireland is maintained; that our National Memorial is afforded the dignity that the people of Ireland require it to have, and that it is not the subject of unseemly controversy now or in the future,” they added.

Although the importance of creating a memorial to commemorate victims of institutional abuse was acknowledged, the decision of the appeals board means the project will now not go ahead.

I am glad about this. Because its not yet over. As long as the church has such a hold on affairs in Ireland. There are the magdelaine ladys who still wait The monument planed with a cross through it it looks more like a monument to the church to thank them for ruining hundreds of thousands of lives. Thats to much irony.Its important for all to realise that Nuns and Priests are men and women. Like others some are fanatics some not. Some are nasty lying people and some not But what makes it dangerous is the power over others. Trusting them blindly with children and vulnerable adults is just ridiculous. clothes blind us to who thay are. Education is too important.

A Very interesting Comment on the Article in the Irish Times

We survivors are very happy Minister Quinn did not get his way on this Memorial, this memorial is the rememberance Garden of the great men and women who fought for a free Ireland. It is shocking that this Memorial should even have been suggested to be planted here in the first place as we survivors never wanted this memorial in the first place. Survivors of abuse cannot even afford to bury themselves, even with the invented Statutory fund by the same Minister who has spearheadded a 50 50 deal of Religious Compensation due to survivors No Health Minister No Justice Minister and No Welfare Minister to aid survivors who suffer throughout the lives they now live due to the Wrongful Imprisonment of children, Child Slavery and Abuse to those same Children, Physical, sexual, and emotional. We " SURVIVIRS WHO STAND TOGETHER" are very happy these MEN and WOMEN have their Rememberance Garden intact and we RESPECT THIS VERY MUCH INDEED. We are only thank ful they will never be forgotten for Fighting for a Free Ireland. It just shows this Government will do anything to cover up the Wrong doings of the Survivors of their Abuse and how they make decisions only CLAIMING we survivors wanted but without our knowing of any such decisions. We SURVIVORS WHO STAND TOGETHER also did a massive PETITION against this MEMORIAL being built on these Grounds of Rememberance and that the Government should spend the money on Improving the very lives that suffered their abuse

memorials should not be dictated by the abusers on their victims.  political parties involved need to face up to their crimes against children for many decades.

Permalink Reply by Rob Northall on November 29, 2013 at 0:23
Have to agree with you Jack the Monument is lipservice pure and simple! All involved acted on recommendations??? From Ryan report, more lipservice.
Pauline I have to agree the design is a religious shrine.
It would be more apt to restore Artane as a living museum?

it looks like a coffin!  hardly a coincidence!  yes it looks very religious. not a dove in sight  ......

pleased we have won the day on this.Far better to help the sick and survivors who have

no where to live,than wasting money on something no one wants.

Permalink Reply by Oliver Whelan on November 30, 2013 at 8:38
Caranua means "Newfriend" Friends, as I watch,,, Quinns Grubby finger, probes our Monumental Grave,, He thinking aloud much money to Save,, We our ambitions buried 'neath Stone,, Nowhere a body not even a Bone,, Revenge is sweet thinks R. Quinn,, Soon shred their records and scatter Within,, A change of name is planned for Fund,, The Groups and I become more Rotund,, Ensure these Irish slaves really Starve,, Between New Friends the Fund to Carve.

Permalink Reply by Oliver Whelan on November 30, 2013 at 8:45
Friends, fellow Victims,, Irish Laundry Slaves,, Irish Infant child slaves & Sold Newborns,, as Crooked Quinns Grubby Finger passes over a model of our Mass Grave,, read his ugly mind,, that said " Here lie, all Irelands Scum,, To whom,, I'll never give a Crumb,, Who deserve their much earnred Squalor,, I really hate their bleats and Holler,, Buried their claims in words crush by Stone,, Future generations,, won't find a Bone,, And as I steal away their Orders Loot,, So quiet was I that none would give a Hoot,, Now watch my new wealth Grow,, Ha ha ha,, Easy come but not easy Go,, Revenge being sweet renamed our Fraud,, We so smart,, even Victims Applaud.