Paddy was so on the ball here at least he puts the information we need up on his site, and never made a song and dance about it.
This is just a reminder for those Groups and their websites.
We need action on proper support for survivors. Paddy never asked for one cent for his work, a lesson the groups could learn. I could always go to this mans site for information.
I see NOTHING on group sites declaring what they actually did for the needs OF survivors only promises they cannot keep.
The Religious also claimed they were supporting children and got funded to do so look what happened there. Are the Government still going to turn another blind eye?
A government cannot make deals with unprofessional, Uneducated, Unqualified people.
The reason we have these So Called Groups is simply the professional people would make sure we get the treatment we deserve, and that would cost the Government.
THE HSE should be forced to look after survivors properly. The survivors in rural areas can not afford to even go to hospital in the City from rural areas. They live in places where there is no dentists but now cannot afford them anyway with the last budget.
The HSE however are funding these Groups, where does this nightmare end?
Posted by Paddy on 05/04/201043 comments

Redress could have been far easier for abuse victims

OPINION: Was an adversarial legal approach the best way to handle applications to the abuse redress board? I don’t think so, writes RACHEL FEHILY

LAWYERS SOMETIMES forget how intimidating the legal process can be for people outside the profession. I have no doubt that applying for redress, negotiating settlements and appearing at hearings before the Residential Institutions Redress Board was an extremely difficult ordeal for many of the survivors of abuse in residential institutions.

The survivors who prepared cases for their applications were the most vulnerable people I have ever met. Many had serious problems, including homelessness, alcoholism, drug addiction, depression, mental illness, psychological distress, medical conditions and physical injuries. Some were poorly equipped to prepare themselves and engage in the process. It was important that they were well represented, guided and advised by their lawyers throughout.


I wonder was it right that they had to interface with the State via an adversarial legal forum? Was such a forum able to meet their needs? Were lawyers, however well-meaning and sympathetic, the ideal people to guide survivors through this process? 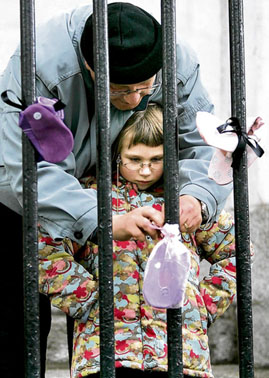 A Child hangs childs shoes on the railings of the Pro Cathedral, Dublin, to the memory of children abused by religious.

The design of the redress board follows a legalistic model and the process was not intended to be therapeutic, although I’m sure that many applicants found the experience of telling the board about their abuse cathartic. However, the aim of lawyers who represented applicants was (quite properly) to maximise the size of their awards, not to improve the psychological well-being of their clients.

Applicants and their legal advisers were required to prepare statements, gather evidence, negotiate and communicate, and in some cases applicants were subject to probing questions or cross-examination.

In preparation for their cases, applicants told their stories and many were assessed for physical and mental injuries for the first time by lawyers, psychiatrists, psychologists, doctors and dentists. The purpose of telling their stories and describing their injuries was so that comprehensive evidence of their injuries could be presented to the board at a hearing or settlement meeting. It was not done for therapeutic reasons, although I am sure for many it proved to be a first step on the road to dealing with some of their injuries.

The process bore a strong resemblance to an assessment of a personal injury action, although it was less formal, and the standard of proof was lower. Even so, at each hearing, a chairperson, board member, stenographer, registrar, and opposing legal counsel were present. While it was necessary to conduct the applications this way because taxpayers’ money was being paid to applicants, and the board had to guard against fallacious claims, I have no doubt some applicants were intimidated by the formal setting, were hurt that their evidence was minimised, or upset due to robust cross-examination or impatience from their hearers.

There have been media reports that some of the applicants were unhappy with their experience of appearing before the board, and feel that after they accepted financial awards they were effectively gagged. Many think they cannot talk about their experience of appearing before the board, or cannot subsequently describe to the media the abuse they suffered in institutions because the proceedings are privileged under Section 18 of the Residential Institutions Redress Act, 2002. This privilege is necessary because the board cannot make a finding of negligence, and must protect individuals mentioned during hearings who have not been found guilty of negligence or any criminal act.

The provisions of the Residential Institutions Act 2002, and the function and design of the board, ensure that it is limited to providing the applicants with sympathetic statements of acknowledgement and financial awards. It does not and cannot fulfil all the needs of the applicants, which may be multi-faceted. Applicants who need medical or psychiatric treatment, addiction counselling or education must go to other agencies to have those needs addressed. Lump sum payments to vulnerable applicants with chaotic lifestyles may even have been detrimental. For those applicants, I am sure a treatment programme or pension would have been of greater assistance.

The process of mediation, which is an alternative dispute-resolution mechanism, allows parties to a dispute to design and participate in the resolution of their dispute with a neutral third party. The aim of the process is to allow the parties to tell their stories, discover underlying needs, transform relationships and find a resolution that is creative and not limited to a financial award. Applicants who appeared before the board were treated as individuals who had a private dispute to resolve with the State. They were not given an opportunity to design or engage in a public, political forum that would have assisted them to interact safely with the State and representatives of the institutions via a neutral third party. Such a forum might have helped the parties to find a narrative that would collectively redefine their positions.

The Laffoy Commission gave survivors a forum within which to safely tell their stories. Its report was hugely important, as it recorded and described the horrific abuses that occurred in residential institutions, and gave recommendations. Unfortunately, no forum has been set up to enable survivors to engage with the State and the institutions in a way that might allow them to express their emotional needs, have those needs fulfilled by way of mediated meetings with government representatives or representatives of the institutions, and allow them to transform the narrative of their experience from passive victims to active agents for social change, truth-telling, justice, reconciliation and healing for the whole of Irish society.

If the Government and the residential institutions had set up and financed a centre for healing and reconciliation that allowed survivors and their families to come together with trained counsellors and mediators, it might have helped them to start a dialogue (where appropriate) with government representatives and representatives of the institutions where the abuse occurred.

All the necessary help could have been located in one holistic centre, and specially trained lawyers could have acted as assessors and mediators, and been given powers to quickly award lump sum payments and pensions. Other professionals at such a centre could have treated medical, psychiatric, psychological and dental problems, and helped with addiction, educational needs and other therapies. Many of the survivors lived abroad but they could have been invited to the centre to stay for an assessment of their needs, and been referred on to other professionals at or near their homes.

Now that the work of the board is nearly over, €1.4 billion has been spent and 14,667 applications received, I hope the current Government is planning to write to all the applicants when the work of the board is complete. It would be useful to ask the applicants what effect the process and award had on them, in order to discover whether or not it was therapeutic or anti-therapeutic. Did the financial award they receive address their needs? Was the process stressful? Cathartic? Did it provide an opportunity for healing or reconciliation? Were they intimidated? What did they want the State or residential institutions to do in response to the wrongs they suffered? Did they want or receive an apology? How important was an apology to them? Has their identity been transformed, or do they still see themselves as victims?

Lawyers and judges have always played an important role in protecting human rights and ensuring the punishment of criminal behaviour. However, mass human rights violations demand a unique response. If the Government and the residential institutions responsible for those violations had been imaginative, they might have created an impressive centre for meaningful redress. Then, we as Irish people would have been able to offer a model to other countries that will no doubt be going through similar collective traumas, as more evidence of institutional and clerical sexual abuse emerges worldwide.

The Redress Board should never have happned , The Government should have paid each Survivor over due COMPANSATION, They know who all Survivors are .