A MOTHER and baby home survivor who has longed to find his family for decades has finally been reunited with four blood relatives he never knew he had.

Bradford-based Fred O’Donnell was separated from his mother shortly after he was born at St Patrick’s Mother and Baby Home in Dublin and spent his youth being passed between orphanages, foster parents and Christian Brothers schools.

He never met his mother but documents found by his daughter Theresa Wardley last year revealed that she had been sent to a Magdalene laundry in Co. Cork, where she spent almost 60 years before her death in 1996.

It also revealed that she had had another son; born in another mother and baby home two years prior to Fred’s birth.

It was then that the father-of-three, with the help of his children, decided to search for his long-lost sibling and any other relatives he might have.

Late last month his long-held dream was realised when his cousins, the children of his Uncle Frederick, came to meet him at his daughter’s home.

“We found dad’s cousins living just 10 miles away from us,” Theresa told The Irish Post this week.

“They are the only blood family we know that dad has, so it was quite an emotional thing. He was quite shocked, as you can imagine, when we told him.”

Mr O’Donnell, who came to England in 1960, has still to track down his long lost brother James – or ‘Jimmy’, but was delighted to meet his cousins and their families at the reunion on October 18.

@ShameOfIreland I work as the Irish researcher for Finders International. Just a short message to say we have located Jimmy O'Donnell

@ShameOfIreland She will know shortly, great reunion or should I say union, they have never met

@ShameOfIreland Alive and kicking in England, he is looking forward to meeting Fred

@ShameOfIreland We took on this case on humanitarian grounds, there is no charge.

@BrendanLya Have let you in so you can share the good news! You are a Star!!

@BrendanLya Will give you a plug!! When the Dust Settles!

To Find out more about Brendans work Click the Image Bellow

Permalink Reply by theresa wardley on July 15, 2015 at 23:34
I can't get my head around it. I thought this day would never arrive. To see my dads face today when I told him his brother had been found meant more to me than winning the lottery. A heartfelt thank you to finders international for giving my dad his brother x

After 80 years thinking he was an only child, Jimmy is ready to meet his long-lost brother, thanks to the Herald

An 80-year-old man who believed all his life he was an only child has received confirmation this week he has a 78-year-old brother.

Dublin-born Jimmy O'Donnell received a telephone call yesterday from his long lost brother Frederick's daughter, Theresa, who asked him if she could call him "Uncle Jimmy".

"It was a wonderful moment," Theresa Wardley said.

The two brothers will meet for the first time in their lives thanks to a story in the Herald and the successful efforts of company Finders International.

The brothers were born in separate mother-and-baby homes in Dublin in the 1930s. Jimmy was brought up in an orphanage in Wicklow, while Frederick spent eight years in Artane Industrial School.

Their Dublin-born mother Julia ended up being confined to a convent-run Magdalen Laundry in Cork when Frederick was just 18 months old. She spent her entire life at the convent and died there at the age of 81 in 1996.

Neither of her sons were told of each other's existence. Frederick married and raised a family in Bradford. Jimmy never married.

Frederick, who has no memory of his mother, only discovered she had given birth to another child when his family began to do some family research in recent times.

Theresa appealed to Herald readers last April for anyone who could help them discover if Jimmy was still alive or knew where he lived.

The Herald story was seen by Finders International, a company that tracks down relatives of people who die without making a will.

Its researcher Amy Littlechild (27) told how after extensive work she managed to track down Jimmy on Wednesday at his place of work at a pub in Cheltenham.

Theresa said last night: "My dad said that, no matter what happens in future, he feels his life is complete now and he is so looking forward to meeting Uncle Jimmy."

They Finally met today! This Photo says more that 1.000 words ever Could? 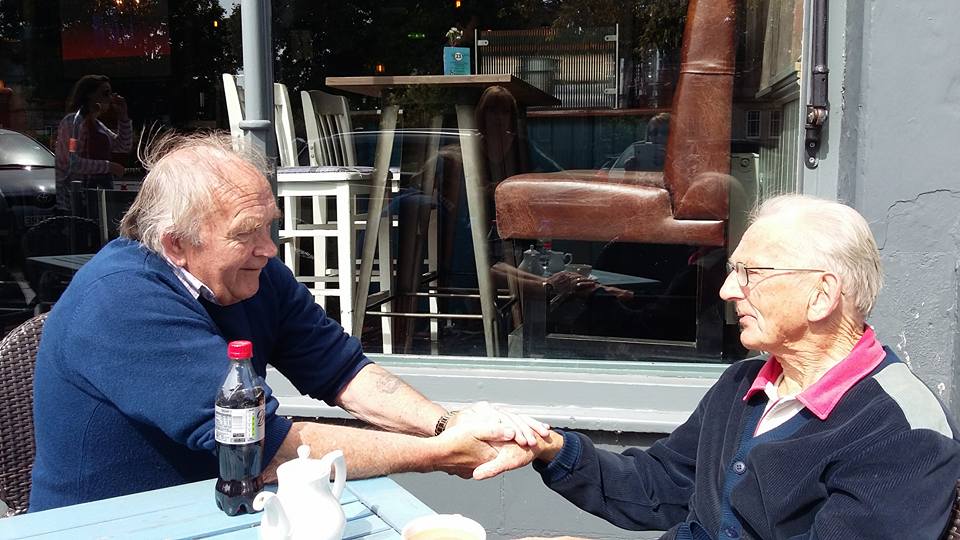 Permalink Reply by theresa wardley on August 2, 2015 at 22:05
So emotional no words to say