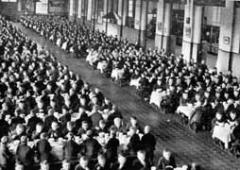 This photo is of the dining hall in Artane. I remember having to work in here. We were made to do all the cooking, cleaning, serving food, ETC. If you wanted sugar, cornflakes, jam, or anything not on the menu, you had to buy it from the brothers shop, even toothpaste had to be paid for.

Comment by Geraldine Brocas-Jackson on March 16, 2011 at 23:47
Brutal Sadistic Child enslavement of the worst kind. Both the Irish Government and Roman Catholic Church are totally responsable for deliberate Illegally  passing judgement in their criminal courts on babies and young children to  be  condemed and inprisoned  into reformatories to suffer hard labour and Sadistic Brutiality at the hands of  Mad Deranged Sadists and Psycho's , they distroyed the lives of so many Irish children and families   the effects will last through  generations ,every child that went through that systum weather alive or dead should be compansated to the tune of at least $600,000 each paid directly to the Survivors or their families. WHAT A DISGUSTING DARK PIECE OF HISTORY ,No wonder they set up those groups to HIDE  BEHIND,> THINK ABOUT WHAT WAS THE REASON WHY THEY PICKED OUT A FEW PEOPLE SET  THEM UP AND FUNDED THEM????WITHOUT CHECKING ON THEIR MENTAL STATE  OR QUALIFICATIONS IN DEALING WITH SERIOUS TRAUMA CASE'S ,  THOSE FUNDED HAD THEMSELVES GROWN UP IN REFORMATORIES  AND IT IS NOT ROCKET SCIENCE TO WORK OUT ANY CHILD WHO GREW UP IN SUCH A SADISTIC ABUSIVE ENVIORENMENT WOULD BE VERY DISTURBED IN SOME WAY ,HOW ON EARTH WAS THAT SUPPOSED TO WORK FAIRLY ,THAT  WAS NOT FOR THE BENEFIT FOR SURVIVORS >BUT FOR THE GOVERNMENT AND CHURCH'S OWN  BENEFIT  TO COVER IT ALL UP ,they sit back and watch HAVE A GREAT LAUGH  at the MESS Thinking they solved the Problem.

These Photos of the refectory and dormitories were staged. It angers me that people will believe that there were table cloths on the tables and white sheets on the beds! They would not recognise the truth if it kicked them up the backside.

As for sugar, cornflakes and jam you must be joking. We had black bread which we called 'jang' and dripping was called monyum. I was in Artane from 1941 to 1947 having being transferred from St. Patrick's in Killkenny where I served 8 years from the age of two. I have written a full description of conditions and the daily routine in each of those Industrial Schools in my latest book: 'Lonestray Survivor' an updated version of Lonesome Stray.

Conditions changed considerably in the years after I left. If you wish to learn some of the real facts of life in these labour camps in the 1930's and 40's I'm prepared to put extracts from my book on here. The first book Lonesome Stray I was written in 2006 and published in 2007 before the Ryan Report and every thing I wrote about Artane was born out by the Report.

I'm pleased to have written my story before it was too late, if only for my family to learn of ' The shame of Ireland.'

The ironic aspect of the story is that had my father's case against the authorities been heard the same as the case in Dec. 1955, there is no doubt that I would have been returned to his custody. He and his family had already raised my eldest sister, who I tracked down when I was 17. She had a good education at St. James School Protestant School in Dublin and went on to do well in life.

The legal profession were also wrapped up in the Church State in doing their bidding. Now, they're like vultures feeding off the misery of victims when they should have fought to save all those children years ago.

His case was far stronger: Re: Doyle an infant, case in the Supreme Court where the judgment handed down declaring the child to be illegally detained and was to be returned to the custody to her father.

Later there was a film made of the case; starring Pierce Brosnan.

My younger sister was 'put away'  in Whitehall Industrial School at age 7. My father got her out on license and refused to return her. They insisted on having her back because she was "attending a Protestant School."

It is difficult to know whether to laugh or cry when reading all the correspondence, (one of outright blackmail) that passed between the schools and the authorities. I've copied them all into my book word for word. The one thing they forgot was: when you tell one lie, you have to remember all the lies that follow. I'd like them to try suing me, it would be fun.

Ref: the chosen few who became group leaders. do you know how that selection came about?  i know some people were saying at one time "all we want is to hear the words sorry". they got that from the removed prime minister but was that really enough?