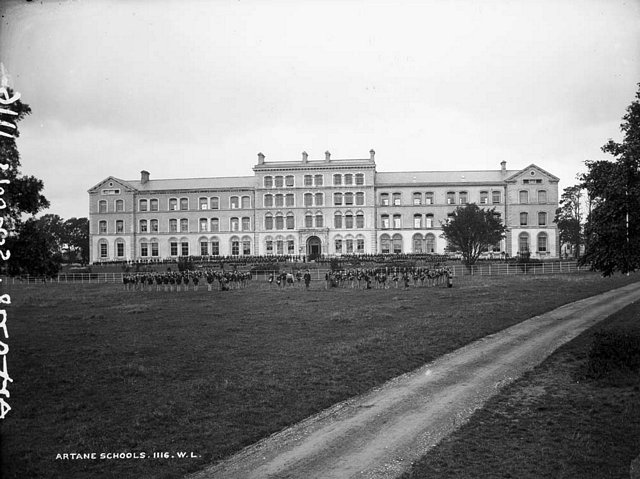 This photo is the front of the main building of Artane. The large lawn to the front was the main drive to the building. Us boys were lined up and forced to get on our hands and knees and made to pull the grass, even though they had grass cutting equiptment.

Comment by Geraldine ,O on April 16, 2011 at 14:36
This House Of Horrors distroyed my brothers lives. EVIL CHRISTIAN BROTHERS MAY YOU ALL ROT IN HELL.

A dark foreboding place the memory still lives with me to this day. Transferred there from St. Patrick's in Killkenny when I reached age 10 in early 1941 to serve the final six years of a 14 yr sentence. Recently I discovered that I  was 'Ultimately Disposed' of, the day before my 16th birthday. The first 16 years of my life I never knew my birthday, only to discover it when I applied to join the British Forces at seventeen. I had to obtain my birth certificate as proof.

In the past 18 months I've obtained documents to prove that they lied and used blackmail to deny any members of my family access to me during the whole of my incarceration. I believed and accepted that I was nobodies child. In my book I refer to the 'Nobodies'. There were just enough of us in Artane to keep the livestock fed, milked,watered and housed during the holiday periods when all other boys were allowed home.

They stole my childhood, identity and country. I've spent the whole of my life trying to prove I'm somebody. In spite of achieving many things in different fields of life there is always something missing. Just one example I turned up with a British passport to represent Ireland at sport!

Hi Patrick. One of my best chums in St, Patrick's Kilkenny was transferred to Artane ... I never saw him again.  This was March 1962 ... his 10th birthday was March 10th.

The nuns ran visitors from St. Patrick's - including Mums and Dads. I eventually 'graduated' to Ferryhouse ... but Artane was one of the places the Rosminians threatened to send us if we were bad!!  So even they knew that Artane was an evil place!   Also it came out in the testimony at the Child Abuse Commission that the Christian Brothers used to 'second'  their members to other non-Christian Brothers Industrial Schools - not stated in the testimony but implied was that these Christian Brothers were training the members of other congregations in how to .... control children!

In some ways I was lucky as I knew no different growing up in Industrial Schools. In fact I thought St. Patrick's was an orphanage until 2006 when I was rudely informed by the solicitors for the nuns that I appeared at Dublin DC in early 1934 charged with receiving alms and sentenced to 14 years.

My experiences during those years made me all the more determined to achieve goals in life that I was told were impossible. I was able to attain  my dream of retiring to a country home at age 54. No, I did not marry a rich girl, but one who showed me the meaning of love. She was an 18 yr old factory girl who started work at 14.

The nuns in Kilkenny loved to put it around that we WERE orphans - all the better to screw money out of the unsuspecting public.

My big beef with the nuns is to do with my mother. I went into St. Patrick's in January 1958 and was then transferred aged 10 onto Ferryhouse in Clonmel.  During my time in [Kilkenny] the only information I received from the nuns about my mother was that she was dead - basically that I was an orphan - and that my mother was a tramp and no good to anyone. That she was a wicked woman who was burning in the fires of hell where she would remain for eternity.

Although my mother was buried in August 1980 she died a long long time before that - for you see I BELIEVED the nuns - she was dead to me when I was in those places. The tragedy, to me, is that this denigration of my mother by the nuns prevented me from ever seeking her or her family out. They made me feel ashamed of my mother (and my kith and kin) and this shame has haunted me. And when religious people talk about forgiveness and moving on they are really asking us, asking me, to forget. I will not forget and I will not forgive.

It's impossible to return respect, affection, even love to those who never displayed any of those; to me Love is not a solitary thing it has to be shared to be experienced!

Comment by pauline jackson on October 11, 2011 at 17:58
Love was only ever mentioned in talking about jesus. how on earth can we move on as thay say . no one can give us new memories. or tell us how to become different.its our childhoods its not thiers. we were brought up to feel inferier. and no place to go to afterwards finished off what started in the instutions. we can be us as we cant take hold of someones life and make it ours.

Pauline, Your first sentence sums it up so well.. The Religious Orders talked about love all the time, but never showed it. They were not ones to look up to, rather they were to be avoided at all costs for fear of their actions against us.

These days I help others who are carers of loved ones suffering from Alzheimer's. Like most things in life I learned through first hand experience by caring for my wife on my own, in our own home till she passed away. All the experts advised against attempting it. In her final years I bought a computer and searched the web to find anyone attempting what I intended, as I wished to share information. U.S. and British sites said it was impossible without help.

It's a long story and I'm in the process of writing it for the benefit of others. Briefly, one afternoon I had to call a doctor out as she became unconscious. He advised, I not sit holding her hand over night as she was likely to pass away when I made a drink or visited the toilet. She survived a further four years and eight months! I made film and photos of our journey.

On reflection I now understand why it is impossible for most people to care on their own. In addition to the personal care, there was washing, ironing, cleaning, cooking and shopping to be done. I was very fortunate in that I was always very physically fit and capable of carrying out the tasks.

The most important ingredient in the caring was LOVE. She had introduced me to the true meaning of love. Just like any stray dog you win over, it will guard you with it's life. We were married 52 years, she was my inspiration and salvation.

Andrew, in 2006 I sent a draft of chapter two of my first book 'Lonesome Stray' to the nuns in Killkenny. They had solicitors on their behalf contradict a number of facts. Firstly they said I'd described their dress incorrectly.

As I recalled it, they wore a black habit and veil, with a white covering about the face and chest with a gold cross. They insisted they wore an all white outfit. When I produced a photo of a group of nuns outside the school dressed as I described, they then insisted that they wore black when outside and white inside the school!

They were also in denial with regards the death of a boy from eating poisonous pods that hung  from the low lying branches of a Laburnum tree. They could find no record nor grave of such a child. I later had it confirmed through another contact that the child was buried at St. Michale's  in Co. Waterford. Why they persisted in lying I'll never know because all the evidence is there.

I've a copy of my record from there, which states that I was Illegitimate, whilst other records reveal the reason I was there: charged with 'receiving alms' and 'Father deserted the family.' The latter fact was later proved in court to be untrue. In addition all my record referred to me as 'Charlie' when my birth and Baptismal certificates state otherwise.

The Christian Brothers were no different more lies. These people were so stupid they failed to realise that once you lie you have to have a good memory of all the lies told.

As for money, I never questioned what happened to all the eggs we collected on the poultry every day. We received two eggs a year at Easter. We looked after hundreds of chickens, ducks, geese, turkeys and guinea hens. During my six years in Artane I never tasted chicken, though we also killed, plucked and prepared the birds by removing the gizzard, heart, liver and neck then packed them. Only three of us were employed on the poultry farm, with a boss by the name of McBride. Over Christmas we worked longer hours and it never occurred to me to question what happened to the birds. Its taken all these years later, for me to realise that I was a small cog in a large industry founded on free child labour. There was so much more, with the livestock on the farm, the veg from the fields, plus  there was the produce from the large garden. For all of that they let us go hungry.

I'm pleased I managed to live in denial for most of my life and now written three books for the benefit of my family and for the record. Many of my generation went to their grave too ashamed to tell their stories or were unable, due to a lack of education.

It's amazing to think that these Religious Orders believe they could teach children in an environment that lacked love, nurture, proper food, the use of physical and mental abuse plus hard work.

Comment by pauline jackson on October 12, 2011 at 22:28
When my brothers came out of artane we did not know each other. All siblings were separated. But from the begining of all this time that we have been trying to be heard the nuns have been lying' thay preach to others but thay are unable to see that we dont believe them. thay wore cream coloured clothes in africa. But in ireland thay mostly wore black' i suppose it hid stains better. i still remember the smell of the robes.  there was no excuse for overworking and underfeeding children when thay were being paid.religion is just a word its not an excuse.hymes in the time thay represent were perhaps love songs. but jesus is dead and that makes them frustrated.