Former Minister Pat Carey Throws Himself on his Sword

Earlier this week the "Garda" Leaked this story to the Media!

When “Whistleblowers” release information about the Garda they get Pursued Hounded and their Careers are Irreversibly Damaged! This is the way the Garda Police their own!

His Own Party Appear to have Deserted him?

More worryingly the ensuing Media Frenzy along with focussing on the Alleged Child Sex Abuse, focuses on the fact he is a “Gay Man” and was a leading proponent in the Same Sex Marriage Referendum!

There a lot more to this than meets the eye?

I find the linking of Paedophilia to being “Gay” flys in the face of ALL the Research I have read on the Subject!

I have reproduced the Original articles bellow for you!

Make YOUR Own Mind Up?

Mr Carey (68) issued a statement through a solicitor tonight in which he said he does not know if he is the minister at the centre of a garda investigation into child abuse. However, he admitted that he is aware of speculation.

A number of people have given statements to gardaí claiming that they were abused in the early 1990s, when he was a school teacher in north Dublin.

The news has sent shockwaves through Fianna Fáil, which just last month appointed Mr Carey as their director of elections.

He is to voluntarily step down from that position while the investigation is ongoing.

"Our client Mr. Pat Carey, former Minister and a member of many community and voluntary organisations, has instructed us in relation to the rumour and innuendo surrounding a newspaper article published yesterday entitled ‘Former Minister investigated by Gardaí over child abuse claims’.

"Mr. Carey is deeply upset to be contacted by various journalists on this matter when he has no knowledge of the actual complaints allegedly made. He absolutely and unconditionally denies any impropriety in this matter or in his 30 years experience as a teacher; as a community worker and in his public life. He was distraught to first learn of these matters on the front page of a national newspaper. He is also concerned at comments allegedly attributed to Gardaí in media articles in the past 24 hours."

"Mr. Carey is a respected person and is entitled to his good name. However, in order to allow the good work of the organisations he is involved in to continue without controversy or distraction he will step aside from all such roles to allow any investigation to take place. This includes his role as Chairman and member many community and church related organisations. He will also step down from his role as Director of Elections for Fianna Fáil and as a member of the Fianna Fáil party."

"Mr. Carey does not know if the allegations in the national press relate to him but given the unfounded speculation that has arisen he is taking this action of his own volition and with a heavy heart."

"Mr. Carey will not be making any other public statement and the matter will be dealt with through his solicitors."

The Kerry native was a TD for Dublin North West from 1997 to 2011 and served as government chief whip from 2008 before becoming Minister for Community, Equality and Gaeltacht Affairs in 2010.

He lost his seat in the 2011 but has remained active in politics, most notably during the recent marriage referendum.

Read More: Pat Carey: Best thing to happen to me was losing my seat in 2011

During the campaign the 68-year-old came out publicly as a gay man. He said he had been openly gay for the last four years but had never “come out” as such.

Read More: 'I got a lovely text from Leo when I came out'

Read More: Coming out is crucially important for gay people

Gardaí launched the probe after a woman, in her 30s, came forward to claim that she was abused by the man in the early 1990s.

Officers have now spoken with a number of people who have given similar statements, alleging abuse in Dublin and midlands.

It is understood that the allegations are at the “lower end” of the scale, with sources saying they will be difficult to prove.

However, gardaí feel there is enough similarities in the statement s they have taken to warrant a full investigation.

They will not speak with the ex-minister until they are satisfied that they have met with all potential witnesses.

Sources in Fianna Fáil say they are “stunned” by the allegations.

A Fianna Fáil Spokesperson confirmed tonight: "We have received confirmation of Pat Carey's decision to step aside from his role as Director of Elections and as a member of Fianna Fáil."

"He has outlined his reasons for this in his own statement released through his solicitors. An announcement on his replacement as Director of Elections will be made in due course.”

When he was appointed Director of Elections last month, Fianna Fáil leader Micheál Martin said Mr Carey was “respected throughout the organisation.”

Then there's this version from the

A Garda investigation has been launched into the leaking of alleged complaints of abuse against an unnamed politician.

The 67-year-old said he does not know if allegations reported in the media about a former politician relate to him but that he was resigning following "unfounded speculation".

Reports of the alleged complaints emerged two days ago with the Garda press office stating it is the force's policy "not to comment on individual cases" before further information emerged attributed to sources.

In a statement issued through his lawyers last night, Eames Solicitors said Mr Carey "absolutely and unconditionally denies any impropriety", that he was distraught to hear of the complaints in the media and that he was "concerned at comments allegedly attributed to the gardai in media articles".

The lawyers also said Mr Carey is "a respected person and entitled to his good name" and that he was issuing a statement following "unfounded speculation".

The Garda press office said it is examining how information on a live investigation was made public.

"An Garda Siochana wish to confirm that we are examining all the circumstances surrounding how information relating to an ongoing criminal investigation entered the public domain," it said.

Mr Carey, a former TD for Dublin North West, was appointed last month as the chief strategist for Fianna Fail's campaign ahead of next year's general election.

He was Minister for Community, Equality and Gaeltacht Affairs from 2010 to 2011 but left public life when the last government collapsed.

He was a school teacher before entering politics and worked in north Dublin.

It is the second time the Garda has launched an inquiry into the leaking of information to the media about an ongoing investigation.

The first incident related to reports about two separate Roma families who both had a fair-haired child taken into state care in October 2013 over unfounded fears the youngsters had been abducted.

The Irish cases followed international headlines about the discovery of a blonde girl called Maria in a Roma camp in Greece who was living with a couple who were not her biological parents.

What does Taoiseach Bertie Ahern do when he's told someone is a Pae...

Great Post Rob - Thank you - also for your information - Charlie Haughey who was not the worst really but perhaps he knew how to fool the public and give them free travel bribes etc.as he betrayed his lovely wife - In the McArthur case - and as nvestigations went on  in two recent murders -  Detective - Kearney (cannot recall his first name - so with respect to him) he surround the apartment of the Attorney General at that time - his name Patrick Connolly - McArthur had committed two murders - the nurse in the Phoenix Part and then the Co Offaly farmer I think his name was Donal Dunne - the madman McArthur beat the nurse to death - just to take her car - McArthur's intention was to get a gun (Donal Dunne was selling a rifle advertised) to kill his own mother - Det Kearney surrounded Connolly's apartment and there inside was McArthur the violent murderer - Haughey questioned Kearney as to why he the Detective did not come to him Haughey first - Det Kearney was a great detective who propably knew that if he went to government he would be silenced - but in his heart Det.Kearney knew he had to deal with the murder of two innocent citizens first and foremost and he found his killer - I read on Wikipedia that Connolly whilst losing the Attorney General's job is still working as a barrister/solicitor today - scary indeed as he is known in the hushed society as a paedophile who had young men supplied to him by McArthur - as for Det.Kearney - he got no accolades or medals - why would he  he was an honest cop... 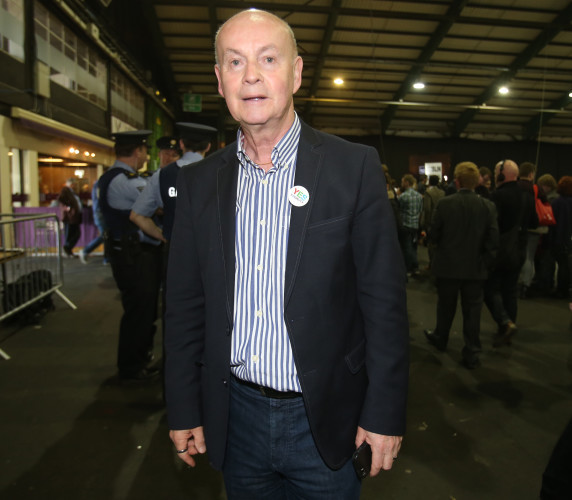 FORMER FIANNA FÁIL minister Pat Carey has launched a High Court action against the Garda Commissioner, the Attorney General, and Independent News and Media following the leaking of allegations to the media last November.

The High Court action was officially lodged last Thursday 19 May. The nature of the action is not yet known.

Carey will now have one year from that date to move upon that action.

Last November the former TD stepped down as the party’s director of elections and resigned his membership of the party following the leaking of details concerning a Garda investigation involving a former government minister.

He also quit his roles with several organisations he had been involved with.

At the time he was Fianna Fáil’s director of elections for the then forthcoming general election. He was subsequently replaced by Cork TD Billy Kelleher.

Carey said at the time that he did not know if he was the minister at the centre of the investigation, but was resigning in the wake of what he said was “rumour and innuendo” regarding his name.

In a statement at the time Carey “absolutely and unconditionally” denied impropriety in relation to those allegations.

Carey has never been charged in any way with regard to the investigation first reported in the media on 10 November last.

When contacted today he declined to comment on the ongoing action.

At the time An Garda Síochána confirmed that it would investigate how information concerning the criminal investigation had been obtained by the media. It was unclear at that time as to whether the leak had emanated from within the gardaí.

A former minister for Community, Equality and Gaeltacht Affairs and Government Chief Whip, 68-year-old Carey served as TD for Dublin North-West from 1997 until losing his seat at the 2011 general election.

He played a prominent role in last year’s same-sex marriage referendum where he advocated for a Yes vote, after coming out as gay during the course of the campaign.