A nurse motivated by his desire for patient safety has been placed off duty, writes Catherine Shanahan 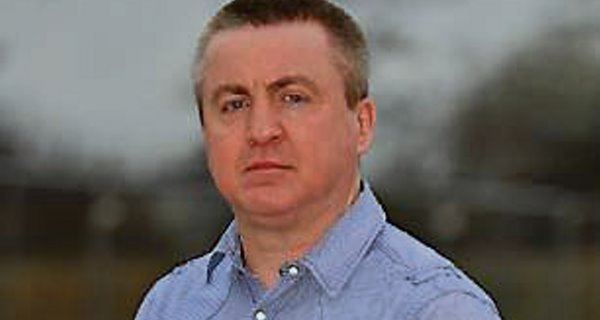 IN THE carefully controlled media environment of the HSE, it’s rare for an employee to speak out. Those who do are usually more vital to the HSE than the HSE is to them.

Hospital consultants working in specialties where such expertise is hard to come by are usually the exception to the rule, so it’s a little more difficult to keep these specialists in check. Not so for nurses, who don’t enjoy the same elevated status in our health service.

And so nurses on an individual basis rarely speak out, leaving it to their unions to represent them. Besides, the HSE has a communications policy, and it means nothing gets out without first clearing the appropriate communications hurdles.

When psychiatric nurse Des McSweeney approached the Irish Examiner to express his concerns in relation to a new €15m psychiatric unit at Cork University Hospital, we recognised him as the exception rather than the rule.

Yes, he is a shop steward with Siptu, but he spoke to us on his own behalf.

He wanted readers to know money was not the overriding issue in the refusal of psychiatric nurses to move from the existing inadequate mental health unit at CUH to a state-of-the-art unit on the campus grounds, that should have opened last January, but remains closed.

Des outlined his concerns in an article in the Irish Examiner on March 16, where he described how his motivation for becoming a nurse stemmed from his own brush with cancer and the excellent care he received as a child.

Ironically, the psychiatric nurses’ refusal to move out of GF meant they were preventing the development of a much-needed oncology unit in CUH, something Des said “weighs heavily on my conscience and that of my nursing colleagues”.

As Des wrote, “GF is an acute admissions unit that caters for people with acute mental health problems at a time of crisis in their lives”, albeit one that no longer meets the requirements of a modern acute unit. The expectation was that the new unit would overcome the shortcomings of the old.

So why were nurses unhappy to move? Des argued in his article the new unit “is not clinically fit-for-purpose and will ultimately endanger the lives of people using the service”.

He said the core issues included attempts to introduce healthcare assistants as an alternative to mental health nurses; a concern with spreading management responsibilities over two floors; and that plans for a high observation ward had been temporarily shelved in an attempt to overcome staffing shortages.

Des wrote that it was his contention “that the agenda behind the new unit is driven by politics and economics, not people’s mental health needs”. He said their concern was the unit would “be used as a benchmarking tool for other units in the process of being built or opening and that similar concerns will arise and we will be left with unsafe clinical environments nationally”.

It seemed to him that “the needs of the people who use the service I work in are being overlooked, and this evokes bad memories of failures in the mental health services which have led to people being neglected, abused and denied the opportunity to live a full life”.

He said this was his motivation for writing in the Irish Examiner.

His was summonsed to a meeting with the HSE three days after the article appeared, during which time he also featured on RTÉ’s Morning Ireland.

At the meeting, he was shown a copy of the HSE’s communications policy. It didn’t stop him speaking out. He gave another interview on RedFM on March 27 and on March 31, he received a letter from Ned Kelly, area director of nursing, Cork Mental Health Services, reminding him he was a staff nurse and that Mr Kelly, in his role as area director, had advised Des of the “expected standard of behaviour and conduct of HSE employees” and that he had also advised him of protocol around communications “particularly with the media”. 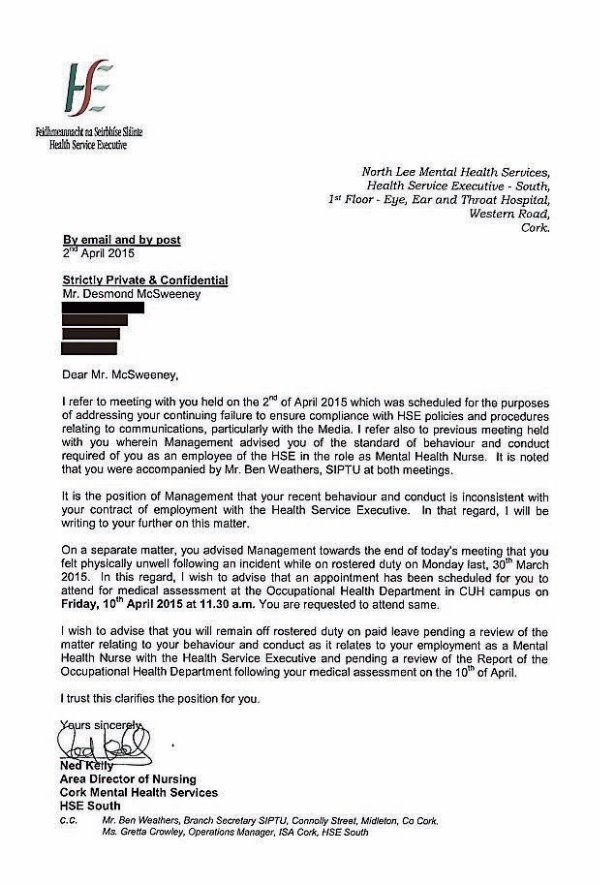 This letter was delivered a day after Des had refused to accept a letter in his workplace, which Mr Kelly had attempted to hand deliver, but which Des had refused to take on the basis it bore his home address and he was without union representation.

The March 31 letter informed Des he had been unreasonable in his refusals to engage with management in refusing to accept the letter and that he was “off duty with pay”. It requested him to attend a meeting on April 2 to “discuss your continuing disregard for policies and procedures to include your recent radio interview”.

A second letter from Mr Kelly dated April 2 followed the meeting Des had with Mr Kelly and with Gretta Crowley, HSE South operations manager with responsibility for mental health.

In it, Mr Kelly said Des’s “recent behaviour and conduct is inconsistent with your contract of employment” with the HSE. It said “I wish to advise you that you will remain off rostered duty on paid leave pending a review of the matter relating to your behaviour and conduct as a mental health nurse with the Health Service Executive”.

Des has received the backing of his nursing colleagues who are members of Siptu. Following a branch meeting last Tuesday, they issued a number of proposals for which they said there was unanimous agreement, including the South Lee Mental Health nursing branch of Siptu “totally support Des McSweeney as their shop steward”; the branch “totally endorse the issues expressed by their shop steward” in the media as they “reflect the clinical concerns of the branch members in their present dispute with the HSE” and they were “appalled by the suspension [placed off duty] from work of their shop steward stemming from his activities as shop steward”.

The nurses appealed to Siptu officials to “support Des McSweeney as our shop steward in this matter which we consider is a cynical attempt by management to gag our shop steward identifying the issues that affect us as members in our work as mental health nurses”.

Last night the HSE said it “remains committed to addressing the issues outstanding in relation to the opening of the new mental health unit” and will continue to engage as appropriate with staff and their representative bodies.