Taoiseach Enda Kenny has held talks with British Prime Minister David Cameron at Downing Street as part of a two-day trip to the UK. Mr Cameron has offered his condolences to the friends and families of the Irish students killed in this weeks balcony collapse in the US.

In relation to the planned referendum on EU membership, Mr Kenny said he believed it was important for the UK to remain an active member of the EU.

He said there were many areas of agreement with the UK and Ireland in relation to Europe.

Mr Cameron has continued his charm offensive across the EU this week ahead of an In/Out referendum on Europe at some point before December 2017.

The Taoiseach began his day in London with a visit to the Irish Women's Survivors Network in Kentish Town. 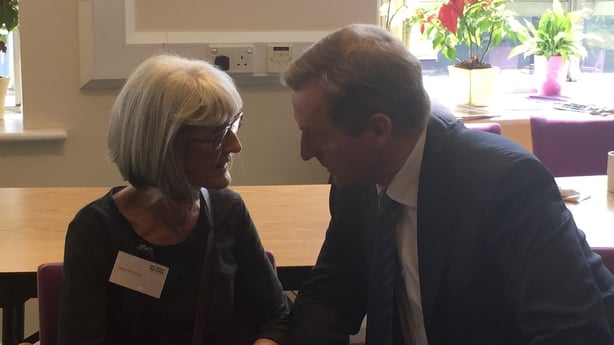 Mr Kenny told the women at the centre - many of whom spent years in Irish Magdalene laundries - that he understood their suffering.

He said they had in their hearts made the journey from victim to witness.

Last night, Mr Kenny attended an event in London to commemorate the 200th anniversary of the Battle of Waterloo.

Taoiseach @EndaKennyTD in London at the Whispering Hope Centre @IWSSN_UK, support for survivors of institutional care

Then There's This Extract fronm the Article

"Earlier, Mr Kenny visited the Irish Women’s Survivors Support Network office in Kentish town, where he met survivors of the Magdalen Laundries, some for the first time since he issued a formal State apology to the women in an emotional speech in the Dáil in 2012

The Whispering Hope project has helped British-based survivors. A total of 76 women have used its services to access the Government-sponsored restorative justice and recompense schemes.

The driving force behind the campaign for 15 years has been Cllr Sally Mulready and Phyllis Morgan.

Ms Mulready said the project has been highly successful and many of the women were now at a stage where they wanted to move forward.

“They owe it to their children and grandchildren to move forward. The focus is on reconciliation and – it’s an old-fashioned word but an important one – forgiveness.”

She said Mr Kenny’s apology to the Dáil had removed the stigma carried by many of the Magdalen survivors.

Talking to the group Mr Kenny recalled his four-hour meeting with the women in the Irish embassy in London four years ago. He referred specifically to the women singing the song Whispering Hope to him.

“One of the most powerful impacts in my career in politics has been when I met with you that day [and] the singing of Whispering Hope,” he said."

This from the Irish Government News Service The Centre provides advice, support and information to all Survivors of Irish institutional care, including the Magdalene Laundries.

AND FINALLY THIS ARTICLE.....

TAOISEACH Enda Kenny today asked all survivors of institutional child abuse in Ireland to forgive the nation for “abandoning them” at their time of need.

Speaking at the Whispering Hope Centre while in London this morning, where he met with Brit-based survivors of Ireland’s brutal Magdalene laundries and other institutions, he commended the bravery and dignity of those who came through those systems.

“I am aware that out there the state and Irish nation apologised to you, followed your stories and witnessed your transformation in a more insightful society,” he said.

Survivors listen on as Enda Kenny ask for forgiveness

“Out there we showed little mercy and here we are asking you to be merciful to us, forgive us for abandoning you, and locking you up.”

He added: “While all this was going on out there, in here, in your hearts and heads, progress has been made.

“In here, we celebrate your lives, we’re uplifted by your sense of kindness, warmed by the prospect of the future. Your forgiveness started on a cold February night, when a nation took back a secret.

“While you have got your heritage back, you have given the country back to us. Ireland is so much more insightful than before. You redeemed us and restored our country.”

“So many Magdalene Women we have supported over the years, are overjoyed about the steps the Irish Government has taken to set the past straight, and take positive steps to ensure the ‘hidden Irish’ have much brighter, happier and secure futures.”

She added: “We’ve bore witness to the progress these women have made, in reconciling the past and ensuring their childhood ordeals and memories do not hold them back in the present, or future.”

Following a meeting with a group of Magdalene laundry survivors in February 2012, the Taoiseach pledged to address their issues and acknowledge the state’s part in their suffering.

A state apology was made in 2013 and a financial scheme launched to provide support and compensation for the Magdalene women and other survivors.

A pot of €250k was allocated  for the Justice and Equality Minister to administer, of which funding was given to IWSSN to expand its operation to reach out to the large number of survivors living in Britain

Set up in March 2014 the Whispering Hope Centre now provides services for Magdalene laundry women and the wider survivor community across the country.

Thank YOU for Reading!

"I feel Sick to my Stomach!"

While you can read this as a Public Post

It tells it all - we are treat with contempt by these people!