I was going to put up a report entitled Socio-Economic Profile of Survivors in Irish Religious-run Institutions by Mary Higgins C.E.O. of Statutory Trust Fund; now “Caranua”. 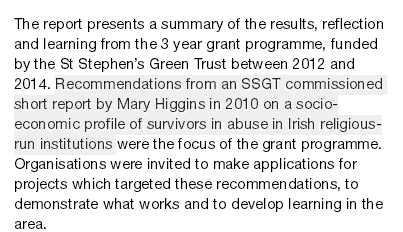 I have Uploaded the full Report and the <Link is HERE>.

From 2010 to 2013 Mary Higgins worked for the Catholic Church under the Guise of the St Stephen Green Trust. In 2013 she was appointed CEO of Caranua. 35 other candidates "with qualifications" were rejected.

I got sidetracked looking at the broader work of the Stephen’s Greens Trust so decided they deserved there own section!

Looking at the 2013 Annual Report  http://www.ssgt.ie/files/annual_report_2013.pdf it States

So it’s a Limited Company; nothing wrong with that?

Let’s look at the funding? 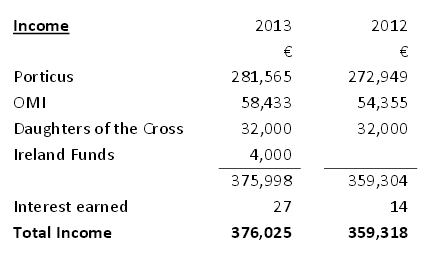 This is where it gets interesting!

“Porticus is the international organisation that manages the philanthropic programmes of charitable entities established by Brenninkmeijer family entrepreneurs. We provide these entities with strategic advice on programmes and offer them a full array of grant management services.

Porticus builds on a heritage of charitable engagement that dates back to Clemens and August Brenninkmeijer, the two brothers who founded the clothing retailer C&A in 1841. In fact, the first record of a gift can be found in the personal ledger of August who, only months after founding the company, recorded a donation “to the poor”.”

A little more of the Family History can be gleaned from the following?

“the firm's humble origins in 1841, when the brothers Clemens and August Brenninkmeyer set up a small clothing store in the Dutch town of Sneek. Their first British store opened in 1922 and their staff register grew to more than 40,000. In creating an empire that made the family richer in Europe than either the Rothschilds or the Krupps, they kept strictly to their Roman Catholic origins.

A source said last night: "They adopted a Calvanistic, almost Quaker approach to business. Staff were looked after from cradle to grave, as long as they kept their noses clean. They left school, spent their life in the shops, and were rewarded with a decent pension. All they had to do was to offer unwavering loyalty."

Originally from Germany, the brothers, who adopted the motto Unity Makes Strength, insisted that the women in the family were excluded from the business. A key to their strategy was stealth. A Dutch journalist once overheard a family elder remark that "openness is a sign of weakness".

Even in their heyday in the late Seventies, with retail outlets in Britain, Germany, France, Holland, New York, Los Angeles and Florida, directors refused to speak in public. "We are a private company," they declared, "and therefore prefer not to make these things public."

Some controversy surrounds their activities in the late 1930s. As a Dutch-based operation, they were caught by a Nazi law prohibiting foreign ownership of firms in the Reich. However, they acted early to favour an anti-Semitic policy. In 1937, the family wrote to Goering, speaking of having successfully "penetrated the position of power held by Jews in the textile industry". They said: "Since the foundation of the firm, no non-Aryan has ever been employed by us."

Under a special status, they were said to have used nuns and monks to stitch clothes. Catholic customers got discounts. Still, the firm suffered badly during the war. Their shops were bombed by both sides or swallowed up by the Soviet Union advance.

After the war, the family fought for years against moves by the Dutch government to force publication of their annual report. They switched from a limited company into a private operation to limit access to accounts.

Changes in style began emerging in the mid-1990s as Next and Marks and Spencer began to seriously start stealing high street customers - although in Holland, C&A, because of an upright image and a traditional eye-on-the-guilder clientele, has never lost its step. In 1996, two non-family members were appointed to the British board. However, the old customs endured and male Brenninkmeyer heirs were still required to appear before a family gathering at the age of 14 to be quizzed about the business's code of conduct.”

Further link with the Family and the Catholic Church >

From 1988 to 2011 Mother Theresa Brenninkmeijer was the prioress, later abbess of a convent in Denmark.

'Ryan covers 18 hospitals, not named, where there were allegations of abuse of sick or disabled children.

WTF I never ever heard of this fund Trust Rob until you put it clearly here people mentioned it i was not too aware it was finished when i was told fucken hell how much must we suffer in silence all the shit it is pouring out now and always too fecken late I never took notice as i heard it ws closed even when it was OPEN i was told it had finished and gone but Mary Higgins knew this all along the ....

the Statutory fund was the biug thing to me it was all we had left as i was aware obviously it was not  so the question arises how many other poor survivors are to loose out just because they did not find the news as we do now //?????

I am trying to understand Rob ? Lost Bud ( I am slow here )?

Nobody should be denied knowledge, Information,  Assistance And Justice When It Is A Right To same And Therefore A Miscarriage Of Justice Instead.

The whole redress system, caranua and towards healing, the indemnity for child abusers and the gagging of abuse victims designed and implemented by the church who abused the victims in the first place.

Silenced By The Church Still?

Correct, towards healing's first duty as laid out in their company documents is to the church, the group the child abusers belong to, given caranua's driving force is the church funded report done by mary higgins who somehow is a self made expert on this it is hardly surprising to see caranua making payments to towards healing and this is only what we know about. It is quite plain to see that abuse victims are not front and center as claimed by caranua given that they refuse to listen to us and are determined to make this church funded report despite all its serious flaws the final say on the matter, it is quite clear even aside from the conflict of interest that abuse victims are being made to suffer because of the bull headed ego driven career advancement that is their only concern. For higgins to accept she was and is wrong she would have to accept the flaws in her report and thereby accept that she had no business every becoming the ceo of caranua.

Ever of course grrr i hate touch screens give me real buttons any day.