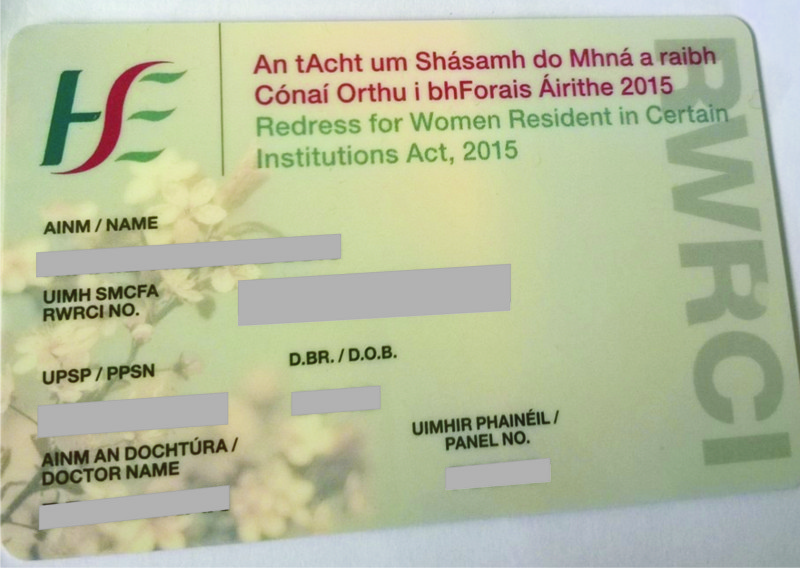 "See that one there? She was in da Laundries; Ya wouldn't know to look at her? Would ya?"

The Blog has been lifted by Broadsheet.ie you can red their reader comments @  http://bit.ly/1fFMy0P

There is a Protest @ the Dail Wednseday 15th July 2015 relating to this! 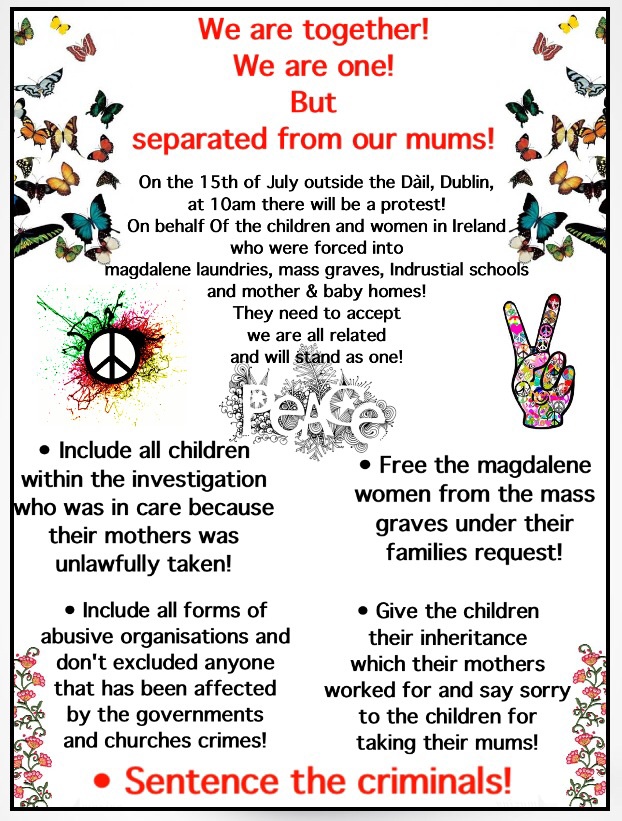 I wish I could be there.....everybody's treatment is disgusting and all they are doing is re abusing all of us......when I went to redress, I was told that it was all kept highly confidential.

This protest is to highlight the importance of how our basic human rights were violated, we were imprisoned  without trials, sentenced without any justification of any known criminal act.  Lastly the Commission of investigation under the 2003 Act, bears no relevance to our cause, as they do not include any living survivor as part of their Consultancy, they are investigating the manner in which we were treated, behind those prison walls, our aging community grow tired of this pretense legalised yet again by the Irish State. to investigate it's own wrong doings. After all how can anyone explain how a world wide religious cult could operate outside the word of the law, surely even people in black attire must be held accountable for criminal offences such as fraud impersonating civil servants, such as accredited  social workers, midwives  etc etc the records speak for themselves.

If this is the case that confidentiality has been breached then surely the people concerned could raise a new legal case against the redress board or who ever has released this information. The existing card identifies the holder as qualifying for health services under the Redress for Women Resident in Certain Institutions Act 2015.

Minister for Primary Care, Social Care and Mental Health Kathleen Lynch said she has asked the HSE to make the change, after concerns were expressed that the cards in their current format unnecessarily identified the women, by including the name of the Act on the card.

Ms Lynch said it was never intended to cause any offence or embarrassment and the cards will be reissued in a more anonymised format.

Speaking in the Dáil, Independent TD Clare Daly said the medical cards were “branded” and described the layout as a breach of privacy.

Ms Lynch said if she had seen the card before it was issued, it "would never have went out" and that she was open to changing the title.

She said the cards need to be identified, but acknowledged the means in which it has been done is not appropriate.

She said she did not think current cardholders would have to return them, but new cards would be issued.

She said the HSE's National Director for Primary Care John Hennessy will meet the relevant stakeholders to address the design.

She also confirmed that €20 million had been paid out to women who were in Magdelene Laundries to date.

In a statement, Justice for Magdalenes Research (JFMR) said copies of the Guide to Health Services under the Redress for Women Resident in Certain Institutions Act given to the group by survivors show that the services outlined replicated the ordinary medical card, of which 90% of survivors already have.

It said survivors are concerned that the RWRCI Cards identify them as Magdalene survivors and described the issuing of the cards as a "serious betrayal of survivors' trust".

The HSE will reissue medical cards sent to Magdalene survivors after complaints they identified the women as having been in a laundry.

The cards, issued in the last few days to survivors under the State’s redress scheme, identify the holder as a member of the Magdalene redress scheme.

The card is headed with “Redress for Women Resident in Certain Institutions Act, 2015” with the hol- der assigned an RWRCI number.

Survivors would have had to produce the card when seeking certain services they are entitled to.

A number of women were deeply upset by the cards with some fearing they would be forced to travel to avail of services under the scheme to conceal their past institutionalisation.

However, in a statement issued yesterday evening, mental health minister Kathleen Lynch said she had asked the HSE to reissue the cards and said they were not intended to cause offence or embarrassment to survivors.

“However, I accept that by putting the full title of the Act on the card it identifies the holders in a way that is unnecessary.

“I am completely open to changing the title as it appears on the card if this is what the women want.

“It requires only a small amount of effort to correct this and I am happy to ensure that this happens.

“I hope this puts to rest any concerns that have been raised. These cards were intended to ensure eligible women finally get easy access to much needed services. I will ask the HSE to make the required change and reissue cards in a more anonymised format.”

Claire McGettrick of Justice For Magdalenes Research said even when the cards are reissued, the services outlined in the document with the card merely replicate the ordinary medical card which 90% of survivors already have.

“Justice For Magdalenes Research again asserts that the healthcare provisions as outlined in the Redress for Women Resident in Certain Institutions guide do not provide Magdalene survivors with the same range of drugs and services made available to Health (Amendment) Act cardholders,” said Ms McGettrick.

“The 512 women who have signed up to the Magdalene scheme thus far have waived their right to take legal action against the State in the expectation that they will receive the full range of benefits and services recommended by Mr Justice Quirke and accepted in full by the Government.”

Meanwhile, the Coalition of Mother and Baby Homes will join with members of Angela Collins’s family to protest outside the Dáil today at their treatment by the Irish state and Catholic Church.

Ms Collins died in a Magdalene laundry after working there for 27 years.