'Vatican skulduggery' - then and now

The short-lived reign of Pope John Paul I has intrigued historians for thirty years. John Julius Norwich, writer and historian is convinced the pontiff, known as ‘the smiling Pope’, was murdered.

Lord Norwich, who has just completed a new biography of the papacy, says
:

‘I believe he was bum

ped off. I think they bumped him off by poisoning his bedside glass of water. My only slight worry is how they got up there to do it.’
Norwich, who met the short-lived Pope, who ruled for just 33 days says John Paul was the victim of Vatican skulduggery.

He believes the Pope was on the verge of exposing a major financial scandal in which the Vatican Bank was deeply implicated.

‘The Vatican is an easy place for murder,’ says Norwich. ‘It is an independent state with no police force. The Italian police can enter only when invited — which in this case they were not.’

The Vatican is an 'easy' place for many things. Vatican contempt for democratic government and values was recently indicated when they entertained African dictator Robert Mugabe despite an EU travel ban.  'We are not a member of the EU' was their response to questions asking why a mass murderer, whose people at home were starving, was wined and dined with full pomp and circumstance.

In 1992 an Irish singer tore up a picture of the Pope John Paul II accusing Catholic clergy of child abuse and the Vatican of organising an international cover up on a massive scale.

.
In 2011 an Irish Taioserch tore up what remained of the reputation of the Catholic Church in Ireland

Retribution on the singer was swift,  the Vatican simply said she was 'mad' and there was no truth in her 'wild' accusations   A Grammy award winning career came to an abrupt halt and she was villified and ridiculed worldwide.

Tens of thousands of abuse casea later  with clear evidence of Vatican attempts to conceal evidence at almost any cost,  including an oath of silence imposed on children, the Irish politcal leader spoke.

The singer was Sinead O'Connor - the Taoiserch Enda Kenny. 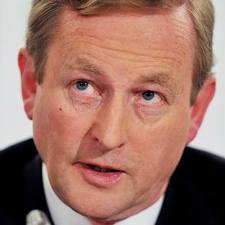 The speech was a devastating indictment of Vatican involvemnet in attempts to frustrate investigation and the course of justice.  Sinead described Kenny's speech as 'The most important speech ever made in Ireland'  and she will know what Mr Kenny can expect when the Vatican mobiilises its forces.

Despite thousands of messages of support, including more than five hundred Catholic priests, Mr Kenny will come under blistering attack after the summer recess.

Already words like 'Irish hrysteria, 'confused' 'rambling' 'dishonest' and ill informed have been used,  perhaps they are saving the 'mad' tag for later.   -(more of this is the next blog re Austen Ivereigh a leader of 'Catholic Voices' a newly trained group of spin doctors)

The papal nuncio will meet with Irish minister Gilmore, perhaps as early as next week,  to discuss the reaction to the Cloyne Report.  No doubt they will also consider the speech of Ireland's leader.

Early indications suggest that the Vatican will stress the 'failure' of the Irish state to enact effective child protection measures in the past.  They will point out that no Irish law required mandatory reporting of the offences and that, in any case, the sanctity of the confessional is, and always will be, absolute.

"THIS is the Republic of Ireland 2011. A republic of laws, of rights and responsibilities; of proper civic order; where the delinquency and arrogance of a particular version, of a particular kind of "morality", will no longer be tolerated or ignored."