Woman, 66, who helped launch a support service for Irish convent victims, is told to leave

A SURVIVOR of Irish convent abuse who set up a pioneering group to help victims living in London says she has been pushed out of her job because of her age.

She has worked there for more than 10 years, running the London Irish Survivors Outreach Ser­vice and helping thousands of victims who were abused in religious convents as children. Ms Morgan said: “I love my work and I don’t see why I should have to leave because of my age. They are doing this before the law changes.”

New rules banning employers from firing staff because they have reached the retirement age comes into effect in October.

David Barlow, the Irish Centre’s new director, said its board had been in retirement talks with Ms Morgan for two years.

He told the New Journal that her contract had been temporarily extended when she reached 65 but that to comment further would break employment rules.

Mr Barlow stressed that the service was not closing and that board members had been in talks with Irish ministers this week about the continued funding of the project.

He added: “Services for victims of abuse will continue.

Ms Morgan was a victim of the physical and mental abuse suffered by tens of thousands of children placed in the care of Catholic religious orders.

At the age of three, she was separated from her mother and placed in the full-time care of nuns.

She told how she would eat pig food because it was better than what was offered to her. “We were treated worse than pigs,” she added.

Ms Morgan said she spent her entire childhood at three convents in the Dublin area, where she claims the nuns abused her.

“Children were placed in these convents for various reasons,” she said.

“They were all over Ireland and many fled to come here to Camden. The are all such a vulnerable group.

“They are not able to hold down jobs because they were so damaged – many were repeatedly raped.

“Many live in dire homes and we get them into better homes. We help them get compensation. We have made a difference to so many lives. It is unbelievable how busy we are.”

The last of the 132 convents of this kind was shut down in 1986. The Irish government issued guidance following an inquiry in 2009 that a state-funded support service should be provided for all victims.

The Camden-based survivors service is funded by Ireland’s Department of Education and costs around £94,000 a year.

for Paul: "I was advised at the Camden center for the reddress board. This left a bad taste in my mouth,  ..."

why?  because court is the place to sort case out?

The High Court is the place to get some kind of justice better still The European Court Of Human Rights. and don't use a Catholic Solicitor.

I totally agree ,these cases are so serious they should all have gone to the high court, Vulnerable survivors were bullied to go to the Redress Board. many were told going to the Courts would prove very expensive and could take years the Survivors would have to foot that Bill, not forgetting most survivors are not in good health, and  are elderly  based in many different countries in this world and were frightened about this ,  No matter how well or NOT survivors might have done in adult life they are still the Vulnerable Abused Survivors Strong Witnes'es to Horriffic Child Abuses ,The coverup has been cleverly engineered survivors who dared try to Talk found themselves isloated. Those Groups are just another willing part of the coverup after all it's their funding is important to them.

I would like to know HOW MUCH IS THE FUNDING THE CAMDEN IRISH CENTRE ARE GETTING OUT OF THE STATUARY TRUST FUND.

From what I have read above; the odds are 100 to 1 that there is a money angle connected to this story.... FOR THE DOUBTERS; All one would have to ask is.... IF David Barlow, The Board, The Counselors, The Staff and other supporters were all "VOLUNTEERS"; and Phyllis Morgan was offering her "retirement"? THEY WOULD BE KISSING HER ASS AND BEGGING HER TO STAY.... (I could just hear it) Oh Phillis, everybody loves and needs you so much WHAT WOULD WE DO WITHOUT YOU?????? WHAT WOULD THOSE WHO NEED YOU SO MUCH DO???? PLEASE DON'T LEAVE THEM!!

Phyllis is being thrown under the bus..... And David Barlow knows the TRUE reason why.. and who will benefit $?

Well Patrick it looks to me the only beneficiarys  from the ststuary trust  Fund  will be >the labour party  in Ireland and the UK , and of course those who work for the corrupt calling themselves group leaders.

This LISOS Newsletter turned up in My email Account this Morning; more disinformation about he Statutory Trust Fund!

Why are the deliberately misleading us?? 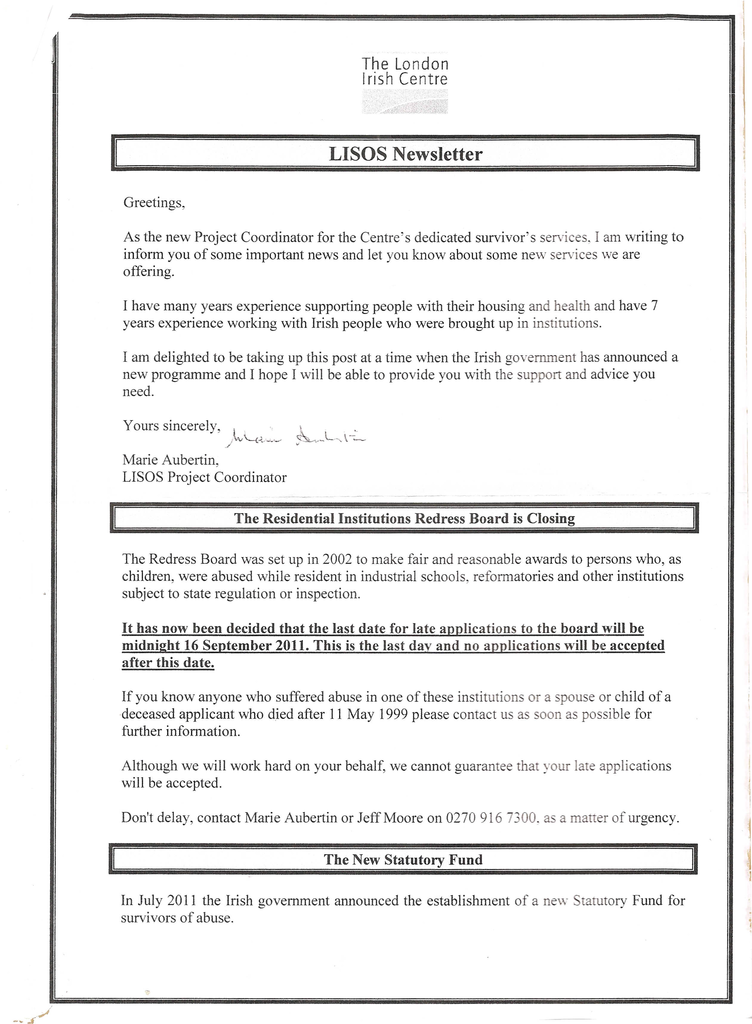 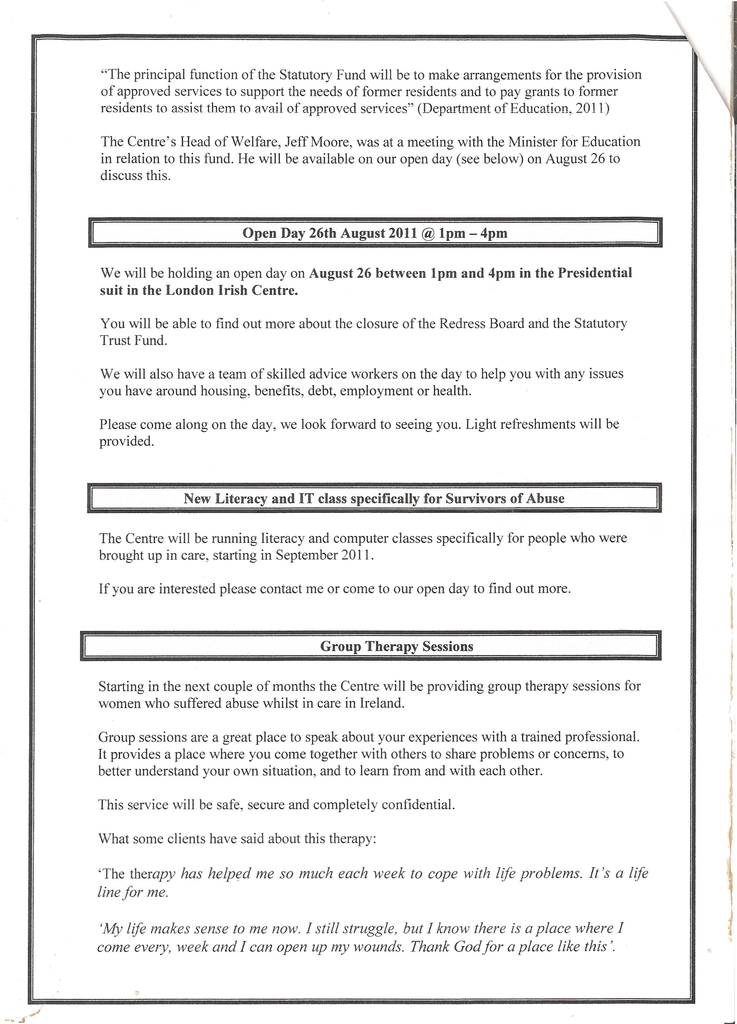 Permalink Reply by pauline jackson on August 26, 2011 at 23:16
I have the impression that it was the same  as before. But anyone in care of the state is considered as a victim of abuse this time around. But the people from the industriel school system are not all in need of lessons. as for a refferal service well most of us are getting old and have learnt to contact the services we are in need of.Wow the president suite for those who live near enough to travel. thats a very clear way of showing us what help is.In that case anyone can be nice if thay are well payed and perks included.Whats new in the education board!!!!. no one seems to get the amount of help thay needed.The industriel schools and the magdelaine laundrys were buisnesses . thay brought in lots of money. if its for all state wards why dont thay just tell us the truth. this is not meant to hurt its just to get to the truth.

Permalink Reply by jack colleton on August 28, 2011 at 2:25
thankyou for posting Rob. following thread with interest. had not been aware of the center until very recently. if had known of the reception in the presidential suite yesterday might have been there.

Well Marie Auberton seen as you are offering can I have a flat in LONDON.

Permalink Reply by jack colleton on August 28, 2011 at 2:27
the department of education and CORRECTION?

Permalink Reply by Rob Northall on November 1, 2011 at 17:05
There is a new support service run by Mrs Phyllis Morgan (voluntary) Based in London more info www.irishsurvivorsuk.org.uk Check it out.