The HSE Say that Survivors of the Industrial Schools are not allowed to drink Alcohol!!

This was Shared with my Facebook Account, Quite Frankly I am appalled at the Controlling nature od the HSE and the Slur on Survivors by their Ban!

I would like to share this piece of information with the public The new policy by the H.S.E for the chosen few .Please read and leave a comment on what you think about this Catherine Coffey Obrien Moll Donovan Maurice O Connell .

This letter I have drafted and will be sent to the relevant organizations and T.D. of Dail Eireann .

I am a survivor of the Industrial School regime where I spent the first thirteen horrific years of my young life. I was informed on Friday 6th December 2013 by a telephone conversation that I received by two members of staff in "RIGHT OF PLACE SECOND CHANCE, CORK” that a Christmas party that was organized for past pupils for the 14th December 2013 in Cork that the venue had been changed. . When asking why at such short notice to the change I was appalled and shocked to hear the response.

“The H.S.E has instructed these groups who are suppose to be representing us in a private memo they received in October which stated any social events funded by them CAN take place in a license premises, but the sale of alcohol is strictly prohibited to be sold to any survivors attending that event".

The original venue that our party was to take place was a licensed premises Redmond’s GAA Club in County Cork. The proprietor refused to comply with this demand from the H.S.E. and so was relocated to a community hall where no alcohol is served. This hurt me. Our dinner will be brought into us and entertainment will be provided. I can attend the social event if I want, but no one can consume alcohol and therefore goes our freedom of choice again. I am entitled to have a drink with my meal if I choose to do so. I said ! no you can’t do that and when asked the reason why? I was informed that it is to protect the safety of their outreach officers. So basically what their saying is we can’t handle our drink we are violent and are all alcoholic’s. I am over the age of 18 and a very responsible adult . To be told again we can’t do what we want, brings it all right back. We are nobody's in these people's eyes .

This so called policy has been signed off by employers across the boards of all survivor groups. This is what I was told. Asking why we were not informed of this new policy. And when I requested the original email I was told it was a private memo only sent to them to which I responded, its not private now . No notification whatsoever was published in any form nor any communication sent out to its members. Although we can attend the event we cannot purchase alcohol. We now are been dictated all over again. I will be gracing the steps of Dail Eireann to veto this" private memo" regarding this ridiculous new policy. The perception they have of us survivors today has not changed and never will. I am extremely upset about everything that has gone on since these groups were formed. It’s the principle which matters in this case. Not the alcohol. and our basic rights as human beings . Talk about knocking people when they are down. The spirit of Christmas has been taken from us again.

interesting insight into their thinking and attitude and lack of cheer!

i could write a book on HSE agents and their attitudes and training.

It was heartbreaking research for 19 years, but I learned to predict their every move with help from a criminologist etc.Like the RC church, HSE use the same tactics in a slightly different way, but traumatizing victims is their "cheer"

HSE is funded (owned) by the church?

Yes, controlled by the church.

Church owns so many hospitals etc

So is legal system.

Red Mass every legal year for the judges, barristers etc in Dublin and elsewhere.

"In Ireland, the Votive Mass of the Holy Spirit (the Red Mass) is held annually on the first Monday of October, which is the first day of the Michaelmas Law Term. The ceremony is held at St. Michan's Roman Catholic church, which is the parish church of the Four Courts. It is attended by the Irish judiciary, barristers and solicitors, as well as representatives of the diplomatic corps, Gardaí, the Northern Irish, English and Scottish judiciary. The judiciary do not wear their judicial robes, although formal morning dress is worn."

Now do you still wonder why there is no justice for  veterans of child abuse in Eire.

thanks Catherine. i shared the Red mass link on facebook. as to no justice for veterans of child abuse in eire (and the irish political parties guilty involved in that child abuse) it seems to me we were prisoners.

How do I sign out from this discussion.  I refuse to be part of this sorry situation. we should be in control of our actions there fore  ignoring such stupid remarks. by the HSE or otherwise. 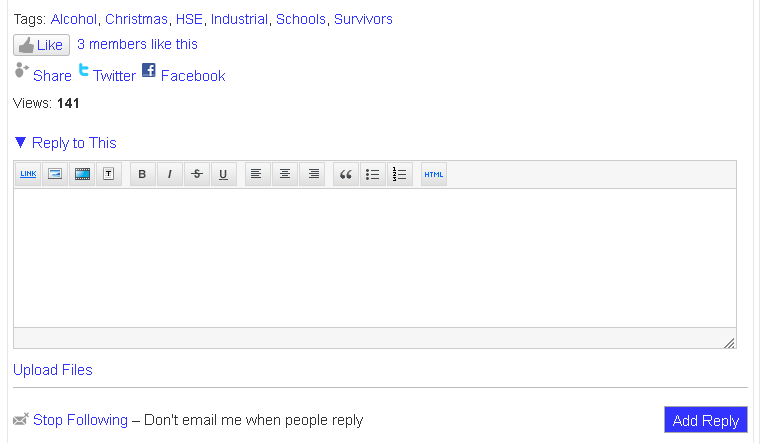 Hi Kate, At the bottom of the original Post there is a Box fro Replying underneath that there is "Stop Following" in blue click that (see photo above as example)

The spirit of Christmas has not been taken from me,  how dare these people go on dictating to us.

We have been told what to do and when to do it  when we were kids now we are in charge of our own lives.

I will not be told by these people how to run my life,  I am a Grandma and and will grow old disgracefully if I so wish.

Good for you. That is the spirit.

we all should drink this christmas as much as we want to if we want to!!

We are totally free to drink as we please.

Universal law states, "do as you please as long as you harm no one".

HSE agents could do with obeying this law rather than making up rules to control others.