Transgenerational trauma is trauma that is transferred from the first generation of trauma survivors to the second and further generations of offspring of the survivors via complex post-traumatic stress disorder mechanisms.

From Wikipedia, the free encyclopedia

Transgenerational trauma is trauma that is transferred from the first generation of trauma survivors to the second and further generations of offspring of the survivors via complex post-traumatic stress disorder mechanisms.

Soon after descriptions of the so-called concentration camp syndrome (also known as survivor syndrome) appeared, clinicians observed in 1966 that large numbers of children of Holocaust survivors were seeking treatment in clinics in Canada. The grandchildren of Holocaust survivors were overrepresented by 300% among the referrals to a child psychiatry clinic in comparison with their representation in the general population.[1]

The phenomenon of children of traumatized parents being affected directly or indirectly by their parents’ post-traumatic symptoms has been described by some authors as secondary traumatisation (in reference to the second generation). To include the third generation, as well, the term intergenerational transmission of trauma was introduced. Building upon the clinical observations by Selma Fraiberg, child trauma researchers such as Byron Egeland, Inge Bretherton, and Daniel Schechter have empirically identified psychological mechanisms that favor intergenerational transmission, including dissociation in the context of attachment, and "communication" of prior traumatic experience as an effect of parental efforts to maintain self-regulation in the context of post-traumatic stress disorder and related alterations in social cognitive processes.[2][3][4][5][6]

Both survivors and immediate witnesses of traumatic events in family history have traditionally been treated by family therapists. The first-generation experiences of combat veterans, hostages, prisoners of war, and the civil population who was victimized at the hands of war criminals from genocidal organizations such as the German Nazi Party, Italian Fascist party, and similar organizations and their (para-)military arms, have been dealt with within the confines of political arena and international law, however the descendants of both immediate witnesses and victims of genocide, colonial suppression, slavery, political totalitarian control, clerical abuse in religious organizations, and many survivors of terrorism had to deal with the victimization symptoms themselves, without the transfer of original trauma being recognized and help offered.

Enslavement and slavery, civil and domestic violence, sexual abuse, and extreme poverty are also sources of trauma that can be transferred to subsequent generations.

Previous research assumed that the trauma transmission was mainly caused by the parents’ child-rearing behavior, however, it may have been also epigenetically transferred.[7]

Molly S. Castelloe Ph.D. The Me in We

How Trauma Is Carried Across Generations

Holding the secret history of our ancestors.
Posted May 28, 2012

What is overwhelming and unnamable is passed on to those we are closest to. Our loved ones carry what we cannot. And we do the same.

This is the subject of Lost in Transmission: Studies of Trauma Across Generations, edited by M. Gerard Fromm (2012). This collection of essays on traumatic transmission builds on the idea that “what human beings cannot contain of their experience—what has been traumatically overwhelming, unbearable, unthinkable—falls out of social discourse, but very often on to and into the next generation as an affective sensitivity or a chaotic urgency.”

The transmission of trauma may be particular to a given family suffering a loss, such as the death of an infant, or it can be a shared response to societal trauma.

Maurice De Witt, a sidewalk Santa on Fifth Avenue noticed a marked change in behavior the holiday season following 9/11 when parents would not “let the hands of their children go. The kids sense that. It’s like water seeping down, and the kids can feel it... There is an anxiety, but the kids can’t make the connections.”

Psychic legacies are often passed on through unconscious cues or affective messages that flow between child and adult. Sometimes anxiety falls from one generation to the next through stories told.

Psychohistorian Peter Loewenberg recalls the oral tradition of his parents who lived through the hunger years in Germany during the First World War when the physical health and stature of a generation was stunted due to prolonged malnutrition. According to their stories, a once-a-year indulgence was an orange segmented and apportioned among the entire family. Loewenberg further identifies a cause chain between physical privations of the German people during WWI, which culminated in the Great Depression (1929), and the Nazi appeal to children of Central Europe. To what extent did “the passive experiences of childhood starvation” lead to a reversal and fantasied “undoing” through the hunger regimen and cruelty of the concentration camps? (Lowenberg, 61) 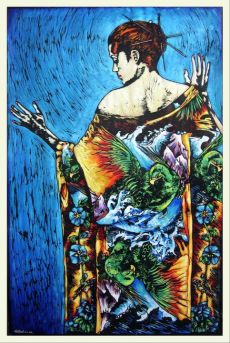 He cites another example of group transmission and its reversal. "The greatest Chinese historical trauma was undoubtedly the humiliation of the Japanese Imperial land” (1937-1945). When Chairman Mao Zedong proclaimed the People’s Republic in 1949 and said “The Chinese People have stood up!” he was repairing historical shame and hurt.

Psychohistorian Howard Stein takes up the topic of collective trauma in America and imagines all the possible directions trauma can be transmitted in nations, ethnic groups, religions, and families. Trauma can be transferred in "vertical" direction, for example, in the brutal downsizing of a corporation. This is also the case in a leadership change at a local church after a pastor has been accused of sexual misconduct.

Stein articulates "horizontal" transmission as the circulation of injury among people in more equivalent powers relations. This is often the experience of health professionals working with victims of large scale disaster, such as the Oklahoma City bombing (1995), who suffer the empathy of witnessing second-hand. Vertical and lateral transmissions may happen concurrently, in relation to the same event.

Transmission is the giving of a task. The next generation must grapple with the trauma, find ways of representing it and spare transmitting the experience of hell back to one's parents. A main task of transmission is to resist disassociating from the family hertiage and "bring its full, tragic story into social discourse." (Fromm, xxi)

Often one child within a family is nominated to both carry and communicate the grief of their predecessors. There was a man who entered a Holocaust Museum requesting that the institution keep the remains of the tattooed serial number taken from his arm. The chosen child is analogously charged with the mission of keeping the family heritage, being a “holding environment.”

How do we carry secret stories from before our lifetimes?

Transgenerational transmissions take on life in our in dreams, in acting out, in “life lessons” given in turns of phrase and taught us by our family. Discovering transmission means coming to know and tell a larger narrative, one from the preceding generation. It requires close listening to the stories of our parents and grandparents, with special attention to the social and historical milieu in which they lived -- especially its military, economic and political turmoil.

The emotional ties between child and ancestors are essential to the development of our values. These bonds often determine the answers to myriad questions such as: “Who am I?” "Who am I to my family?” “Who can ‘we’ trust” and who are our enemies?” “What ties me to my family?” And, most importantly, “of these ties, which do I reject and which to I keep?" (Barri Belnap, 127)

How does one discharge this mission? It is a precarious terrain of finding one's way through a web of familial loyalties to which one has been intensely faithful. The working through of transmission entails a painful, seemingly unbearable, process of separation. It can become an identity crisis, the breaking of an emotional chain. As Fromm puts it, “something life defining and deeply intimate is over.” The child speaks what their parent could not. He or she recognizes how their own experience has been authored, how one has been authorized, if unconsciously, to carry their parents’ injury into the future. In rising above the remnants of one's ancestors' trauma, one helps to heal future generations.

WHAT IS HISTORICAL TRAUMA?

Excellent posts today Rob i want to really dig into them before posting a more considered comment, thanks Michael

This makes good reading Jack. Thank you for this, I am sure this applies to many of us. x

That explains an awful lot to me, I was diagnosed with PSD in 2001, that explains why in 1960 whilst in the SAS I cried when I visited Belsen, prisoner of war camp in Germany, what was extraordinary was in the forest outside, the birds were whistling and singing as I walked towards the opening to the camp and as I entered,complete silence, as if a door had closed behind me and shut out the world, maybe Glin, prison raised it's ugly head as I teared up to the silence of the God forsaken place, Thank you St. Joseph's Industrial Prison for the fond memories. Seanie, (the trush) Morrison CII. ASFE.

Brings It All Back.