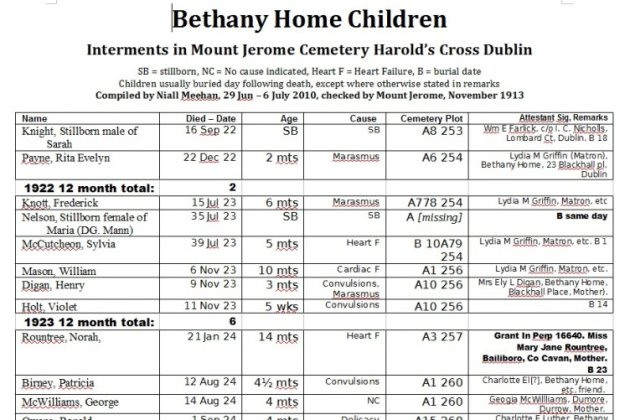 The names of 222 young children who died while in the care of Bethany Home have been publicly released.

The document shows that many of the children who died at the Protestant mother and baby home in Dublin were just days, weeks, or months old. Some were stillborn.

The identities and causes of death are being released at the same time as a memorial stone in honour of the children is unveiled at Mount Jerome cemetery in Harold’s Cross.

Their details were researched from Mount Jerome Cemetery records in May and September 2010 by Niall Meehan, head of the Journalism and Media Faculty at Griffith College, Dublin.

Meehan and Bethany Survivors’ Group member Derek Leinster said that relatives of the children may not be aware that a member of their family is buried in Mount Jerome Cemetery.

It is hoped that the children may “gain a family” through the release of their names.

ThanX Andrew for taking the Time to Take and Share these Poignant Photographs!

As a monument is unveiled today to the 222 children who died at a Protestant children’s home and were buried in unmarked graves, survivors of the home have pledged to continue their fight for justice.

The Department of Justice offered the Bethany Survivor’s Group up to €25,000 towards their memorial, but has refused to include them in the redress scheme that was offered to the survivors of Magdalene laundries.

“To help fund the memorial was the right step on the behalf of the Department, but we want them to know it is only the first step. The State had a duty of care to us, yet we suffered enormous abuse and that must be acknowledged,” said Derek Leinster, chairman of the Bethany Survivor’s Group.

A Church of Ireland service at Mount Jerome Chapel will precede the unveiling of the six foot sculpture at the adjoining cemetery at Harold’s Cross, Dublin, today.

Toys and trees are carved on to the Kilkenny limestone sculpture. The toys represent the childhood the Bethany children never had, the trees the length of time they have waited for their story to be acknowledged. A robin is also carved into the six foot monument.

“The robin is highly symbolic as it’s known for always coming back to feed its young and is a survivor despite its diminutive size. It’s also known as having the loudest voice for such a small bird,” says Derek Leinster, chairman of the Bethany Survivor’s Group.

Coleen Andrews, a survivor of another Church of Ireland home, Westbank House in Bray, will play the organ at the unveiling and survivors and their families from the North, Scotland, England, Wales, Australia and Portugal will attend.

Local TD and Junior Minister at the Department of Foreign Affairs Joe Costello will also be present, as will Sinn Féin deputy Mary Lou McDonald who will be one of a group who will cut the ribbon to the sound of Eamonn Walsh’s pipeplaying.

“It will be a day that we will always remember. We have been 16 years seeking acknowledgment for what was done to us,” said Mr Leinster.

The Church of Ireland will be represented by Church of Ireland priest Canon Mark Gardiner and the Catholic Archbishop of Dublin, Diarmuid Martin, is also sending a representative. Fr Peter McVerry, long-time champion of the homeless, will attend.

Up to €5,500 was raised by the survivors’ group towards the monument before the Department offered to help. This will be used for the monument’s upkeep and for an annual day of remembrance at the monument, said Mr Leinster.

The Bethany Home was set up in 1922 and was run by an interdenominational committee from various Protestant churches.

As well as unmarried mothers and their children, it also took in prostitutes, alcoholics and prisoners and was used as a detention centre for female offenders, non-Catholic children and young people under 17.

Mary Lou McDonald said that the coalition has to date “flatly and coldly refused the Bethany survivors the dignity of recognition”. 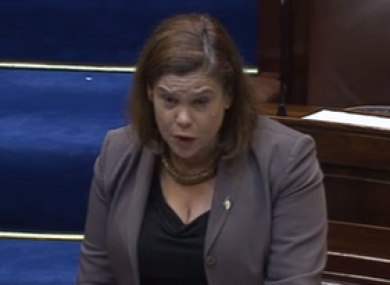 EDUCATION MINISTER RUAIRÍ Quinn has said he will request that the Department of Justice revisit whether or not survivors of Bethany Home should receive an apology and access to the State redress scheme.

The issue was raised during Leaders’ Questions in the Dáil today by Sinn Féin deputy leader Mary Lou McDonald, who said the government has so far “flatly and coldly refused the Bethany survivors the dignity of recognition”.

Yesterday McDonald attended the unveiling of a monument to 222 children who died while in the care of Bethany Home.

She described the ceremony as “sobering” and said it was the first time the children were “officially recognised and mourned” following the “appalling indignity” of being buried in a unmarked grave.

Quinn said that everyone “automatically and instinctively empathises” with those who were “abandoned” in such homes but said that the government has not been “satisfied” that “agents of the state were responsible” for placing children in Bethany Home.

McDonald said that who put the children in the home was irrelevant as the State had failed to oversee adequate standards were in place.

She added that Bethany Home, which was located on Orwell Road in Rathgar, was subject to inspection so there was a “State record in terms of the neglect and the abuse”.

As the home was primarily for unmarried Protestant women and their young children, McDonald said that the survivors felt they were “doubly” ignored “because they came from a minority faith”.

Quinn said he would ask the Department of Justice to revisit the matter. “That’s all I can say at this point in time,” he noted.
Reillycare

McGrath said that it was “another tax on middle Ireland … who are already at the pin of their collar”.

He asked what the cost of UHI would be for individual families and the State.

Quinn noted that such answers could not be provided until after the consultation period of eight weeks. He said McGrath and other members of Fianna Fáil had “immediately jumped in without reading the document”.

The Education Minister stated that the current health system in Ireland was “unfair”, “inefficient” and “quite simply is not working”.

He added that UHI, or Reillycare as some have dubbed it after health minister James Reilly, would “determine access to care based on need not income”.

Meanwhile, People Before Profit TD Joan Collins accused Justice Minister Alan Shatter, who survived a motion of ‘no confidence’ last night, of failing to address a number of key court cases, including those relating to Sarah Bland, Ian Bailey and Cynthia Owen.