I am The Voice" by Diana O"Hara 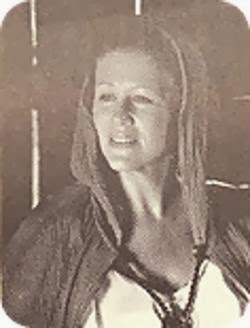 Evil all dressed up in priest costumes.  The Vatican hosted a Masquerade Ball and the price for a ticket?  Your soul.  And the dark spirited ones gathered.  They could think of nothing more grand.  For what is a soul?  In exchange, they could go out and wrack havoc.  They could get drunk on their power and feast on people's pain and be fully protected by those who extended the invitations.  Gloating, the Masterminds sat in the balconies overlooking the costumed affair.  All of the attendees could be used as tools to accumulate great wealth and riches.  Ah, they murmured, we will send out additional invitations to nuns of the same ruthless caliber and increase our legions.  Oh, and the response was most gratifying.  All stood ready for their orders from the Vultures behind their Holy Masks.  And the Masterminds went to work devising a brilliant scheme they thought of as infallible.  Go for the underdog, they ordered.  The ones who have no voice, no position in society.  So, the women were captured by the priests and condemned in a ghost court on charges of "sinning" and sentenced to a life of servitude.  They were then handed over to the nuns who were the guards behind the GATES OF HELL known to the world as convents.  Give them labels such as wayward, whore, incorrigible, headstrong, and promiscuous and have them do penance for their iniquities.  The penance they perform will serve as a means to support the convents and trickles of money will begin to flow through the channels leading to the palace.  Spread the word that the Holy Church is providing a refuge for these unruly women and will be overseeing their salvation.  As part of their salvation, change their names as the nuns do so that they melt into non-existence and are hard to trace.  Hide them behind walls that no authority will dare enter because it has been deemed as Holy Ground.  Encourage society to view them as outcasts not worthy to mingle with others and only bringing shame to their families.  Take their babies out of their arms and tell them they are undeserving and unworthy of motherhood.  For the babies will turn trickles of money into world owning riches.  And this will all be done in the name of goodness and mercy.  Finding homes for these poor orphans of circumstance will be as easy as collecting the price tag placed upon each tiny head.    And those babies were set out on voyages to America and other countries and the Heavens rained broken hearts.  The Holy Ones simply put up their umbrellas and filled their storehouses with treasure.  The stench of greed and corruption was covered up by the incense that filled the churches.  The cries of anguish were drowned out by the recitation of the Mass.  And so this breath sucking, horrendous Masquerade Ball continued with even more invitations going out to state and local governments.  Come, come one and all to the Masquerade Ball . . . there's great money to be made if you answer our call.  The plan is so clever, no chance it will fall.  But one day, the BONES OF THE BEAUTIFUL were found.  The ones with no voice were now speaking volumes through their death.  The remnants of their tired, abused bodies had been discovered and the LIGHT OF TRUTH fell upon the Masquerade Ball.  The predators began to scatter and run and they looked up into the balconies for protection and assistance.  The Masterminds grew nervous as the LIGHT began to penetrate the masks causing them to fall off and expose true identities.  The Masterminds retreated into the bowels of the palace desperate to devise a cover up of their Master Plan.  They returned to the balconies and spoke words of denial.  The Keeper of the Dark Secrets behind the Mask of the Most High proclaimed these atrocities had never occurred.  But the voices of those who had suffered were heard through the voices of their children and others who were stunned by this cruel conspiracy.  A conspiracy generated and played out by those masquerading as Holy Representatives of God down through the ages.  But this conspiracy cover up blanket is threadbare.  You can look right through it.  It's there . . . See it?  The blanket is thrown across a bed filled with deceit and terror.  Only those afraid to leave the shores of the land of their "comfort zone" are blinded.  But the LIGHT always shines brightest in the dark and illuminates the TRUTH.  AND I STAND IN THE LIGHT OF TRUTH . . . FOR I AM . . .
The EYES of all those who witnessed unspeakable horrors in the name of salvation
The EARS of all those who heard the screams of anguish behind convent walls
The HANDS of all those who clung to their babies as they were being torn away from them
The VOICE of all those who were forced to stand silent as their world shattered like a dropped mirror, changing their reflection forever
I AM THE VOICE OF TRUTH AND I WILL NOT BE SILENCED
I ask you, how many golden chalices can be acquired from the Magdalene women's pain and how many jewels can be bought with the cries from their babies?
http://iwillnotbesilenced.com/