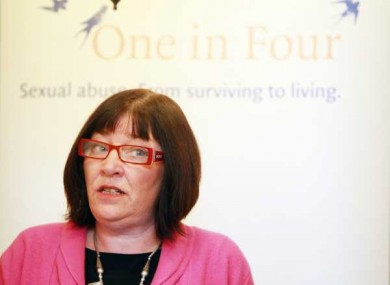 One in Four's Maeve Lewis at the publication of the report yesteray.
Image: Photocall Ireland

CRIMINAL TRIALS IN sex abuse cases only serve to re-traumatise the victims, says advocacy group One in Four.

“It is not uncommon that procedural requirements, such as seeing the perpetrator, recalling the abuse and cross-examination evoke feelings of anxiety, isolation, confusion, exposure, powerlessness and intimidation,” says advocacy director Deirdre Kenny.

As a result of the difficulties in accessing the criminal justice system in Ireland, fewer than 5 per cent of cases result in conviction, the support group revealed in its annual report.

The organisation says it remains concerned about the experiences of victims who have gone through the system. Many of the group’s clients remain bewildered at why the Director of Public Prosecutions has not taken a case against the offender.

“The DPP often does not give a reason,” Kenny said, “there is a definite lack of information being passed on.”

The system is long overdue a fundamental overhaul, she added.

In contrast, Kenny told TheJournal.ie that most of the group’s clients have had a positive experience with the Gardaí in recent years.

“As an organisation, they have addressed the issues they may have had around sex abuse. The experience of victims has definitely improved in recent years,” she said.

Lewis explained that the number of notifications made to the Health Service Executive about suspected sex abuse rose in 2010 because of mandatory reporting of concerns.

We are very concerned that in many instances those concerns are not investigated, either because they are historic allegations, or because we could not name a specific child who might be at risk. Just because sexual abuse took place ten or twenty years ago does not mean that the alleged offender is no longer a risk to children.”

Altogether in 2010, One in Four provided 749 people with information and support in accessing the justice system.

A separate report is due out this year in which the support group examines its clients’ “harrowing experiences” with the system.

Kenny said the consequences of victims reporting abuse to the Gardaí and HSE are far-reaching.

She said, “Clients report social and familial isolation, denial, withdrawal of support, intimidation and threats. Victims fear how the act of reporting and initiating a court case will affect relationships within their family and in the wider community.

Some clients have felt their lives would be at risk if they were to make a report.”

Unfortunately, the adversarial nature of criminal trials leaves many victims feeling they themselves were on trial, explains Kenny.

As conviction rates in Ireland remain low, One in Four hopes to offer more services for non-convicted sex offenders who are living in the community.

The State provides treatment programmes for convicted offenders in prison or those on release.

During 2010 there were 21 sex offender in the group’s community-based treatment. Fifteen of those had abused a child and in 10 of the cases, the victim was a relative – either a sibling, niece or nephew or their son or daughter.

One in Four has previously called for the Children First guidelines to be put on a statutory footing, something which the current Government has promised to do.

Under legislation proposed by Justice Minister Alan Shatter, non-compliance with mandatory reporting could incur a sentence of up to five years. The proposed new laws are causing some confusion and concern, Kenny told TheJournal.ie.

“We get a large number of calls of people who are aware of abuse but are not sure how to report it. It can be very distressing for victims to come forward. They need a lot of support and having clear information is important.

“Clarification on the proposed legislation would be helpful,” she added.