A new company will be set up to govern the new maternity hospital. 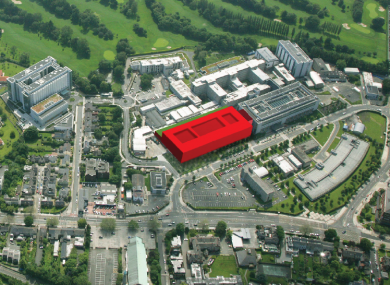 The new building will be located at St Vincent's Hospital in south Dublin.
Image: Department of Health

TDS AND COUNCILLORS have criticised the news that a religious group which has failed to deliver its full share to the redress for institutional abuse survivors is to be the owner of the new National Maternity Hospital.

The Department of Health confirmed that the Sisters of Charity would own the land that the new hospital is being built on.

The National Maternity Hospital is being moved from Holles Street to St Vincent’s Hospital in Dublin 4, with a large development taking place there at an estimated cost of €150 million.

The move to St Vincent’s was agreed last November, when issues arose between officials from St Vincent’s and Holles Street over who would govern the hospital.

Now, the Department of Health has confirmed that the new unit will be solely under the ownership of the Sisters of Charity, who are the major shareholders of the St Vincent’s Healthcare Group.

Confirming the news this afternoon, a spokesperson for the Health Department said today that the despite the land being owned by the religious group, a new company would be established to run the new hospital that would have “clinical and operational independence”.

The company will be called the National Maternity Hospital at Elm Park DAC.

“The identity and ethos of the current NMH will be retained,” the spokesperson said.

The new company will have clinical and operational independence in the provision of maternity, gynaecology and neonatal services, without religious, ethnic or other distinction, as well as financial and budgetary independence.

This independence will be ensured by special powers held by the Health Minister, the spokesperson said.

The NMH board will be made up of nine directors. Four nominated from St Vincent’s Hospital Group, four from the current NMH, and one international expert in obstetrics and gynaecology.

The Religious Sisters of Charity Ireland are one of the organisations included in the Commission to Inquire into Child Abuse (known as the Ryan Commission), which unveiled a vast amount of systematic institutional abuse going back decades.

The group was included in a 2002 Indemnity Agreement which offered €128 million towards addressing the historical abuse.

Following the publication of the Ryan Report in 2009, the religious congregation offered €5 million extra for the redress costs for survivors, which have been put at €1.52 billion.

According to a report last month by Comptroller & Auditor General, the group still owes €3 million of this.

The group also said in 2013 that they would not be contributing to a state redress scheme for survivors of Magdalene Laundries.

Solidarity TD for Cork Mick Barry has strongly opposed the plans for the religious congregation to be given ownership of the hospital.

“The Minister for Health needs to explain why this deal is being put in place when the Sisters of Charity are in serious breach of their commitments to the State,” said Barry.

Labour TD Alan Kelly also questioned the move, saying that it was “extraordinary to see the State continuing to fund an increase in the asset values of those same congregations”.

Sinn Féin health spokesperson Louise O’Reilly said the news was deeply insulting and hurtful to the survivors of institutional abuse.

Poverty means developing a healthy practice of using the word 'enough', to live simply, to be satisfied with what we have and to share with others.

Why should the Government change their ways, at least, unlike some Governments, they don't mind you knowing about the odd brown envelope. Of course , they could have set up a trust for the "Abused of Ireland", who could in turn have rented it to the good Sisters. The main winners being the Sisters, for they could carry on living in the poverty they so adore.

It was Wednesday, the day I met Jesus,

in the Laundry, dressed up as a nun.

When I asked, “have you come for me Saviour,

to take me away from this place”.

He said "Oh Marie, you are joking,

your life's such an awful disgrace".

“You look too delightful and dainty,

with the beauty of Helen of Troy.

You are causing good men to be sinners,

You should have been born as a boy”.

“So hush now, and get to your ironing

you're becoming a bit of a bore”.

Then His Halo fell off of his wimple,

and floated, gently, to the floor.

For the good Lord was Sister Assumpta,

Such a bitch, should have never been born.

She made all of us into victims,

Full of hatred, and fear, and forlorn