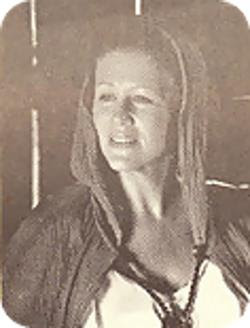 Courage has a name: It is Diana O’Hara. Diana is a survivor of the
Magdalene Laundries operated in the United States by the Good Shepherd
Sisters, a Roman Catholic religious institute for women.
The order is among those that are being charged with the
enslavement and abuse of thousands of woman in what are called
“Magdalene Laundries.”
Diana’s childhood slipped away while she was trapped by walls of stone and hearts of barbed wire.
At the age of seventeen SILENT NO MORE ! walked away from the Good
Shepherd Laundry in Albany New York, but a part of her still remains
there.
As a survivor of child abuse, I understand the trauma that can be
caused when your innocence is stolen and your childhood has been
vandalized. Diana O’ Hara struggles each day with the pain of what
happened to her as a helpless young girl, but she lives her life as a
beacon of strength and an example of an indomitable spirit.
Each day she lives her life as a victory over those who tried to
break the spirit of a “big mouthed Irish girl” who became one of the
most courageous women
Diana (words of an inspring women who overcame what life thrown at her )
When
I was finally released from these "convents" filled with medieval
madness, a kaleidescope of tortured memories would spin in my head
...the entire experience was so bizarre that there was no sense that
could be made out of it ...one cannot make sense out of evil ...Then I
came upon the movie The Magdalene Sisters and there was my life in a
movie ...It was then that I realized there was nothing random about any
of this ...this was ORGANIZED ABUSE across the board ...I woke in the
middle of the night last year and it all became very clear to me ...the
greed, the corruption, the story ....and I got up and wrote I AM THE
VOICE....The Magdalene Laundries/Good Shepherd Convents were here in
America and it is a part of our history that has been kept in the dark
...NOT ANY LONGER ...Girls, young women being locked away is not
acceptable ...it is an OUTRAGE ....our babies were taken ...this is not
acceptable ...it is an OUTRAGE ...I am putting a shout out to any
girl/woman who was "sent" to one of these places to please step into the
LIGHT and join us ...Your experience is a part of all of our
experiences ...we need your voice to make this happen ...We need all of
you ...RISE UP WITH US ....SILENT NO MORE ... 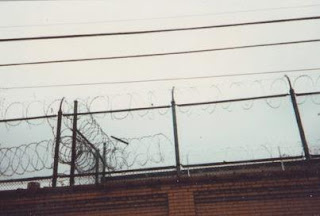 Rolled razor wire on top of the wall that surrounds the Good Shepherd Convent ....this is where I was sent to do "penance" .... 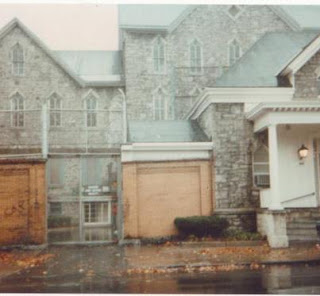